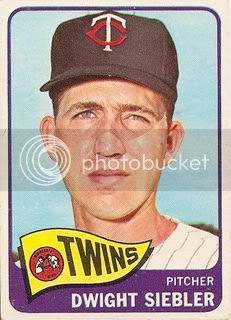 Dwight Siebler is one of four players featured in the 1965 Topps set that had the good taste and sense to be born on August 5, my birthday. The others are Tommie Aaron, Bill Pleis, and Nelson Briles. Good on them.
Fun facts about Dwight Siebler:
-Born in Columbus, NE, Dwight played collegiately at the University of Nebraska before signing with the Phillies in 1958.
-He pitched in the minors for five years before the Twins purchased his contract from Philly in late August of 1963. Two days later, he made his major league debut in relief at age 25.
-Siebler was tabbed to start three days after that initial relief appearance and fashioned a complete-game victory, besting the Senators 10-1. He allowed only three hits.
-Had the only two hits of his career in his second and third games. Both were RBI singles.
-Dwight received only five starts in 1963, but pitched into the eighth inning in four of them, including two complete game wins (the other CG was a four-hit, one-run effort against the Tigers on September 17).
-Despite his early successes, the Twins called on him only 16 times total in 1964 and 1965, with all but one appearance coming in relief.
-Finally avoided the minor leagues for a full season in 1966 and compiled a 3.42 ERA in 23 games, again primarily out of the bullpen.
-Saw action in just two major-league games the following year, bringing his MLB career to a close. He was 4-3 with a 3.45 ERA in parts of five seasons.
-According to this poorly-written Wikipedia biography, he worked with children in Nebraska for several decades after retiring and is an avid bowler with a perfect 300 game to his credit. 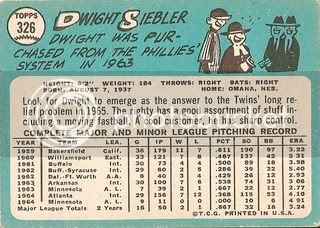