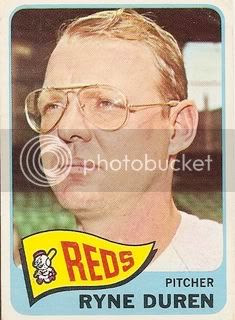 1950s and 1960s reliever Ryne Duren, or 2000s sitcom character Dwight K. Schrute? You decide.
Fun facts about Ryne Duren:
-Rinold George Duren was a native of Cazenovia, WI. He signed with the St. Louis Browns in 1949 at age 20.
-He finally made his major league debut in 1954, pitching two innings of relief in a blowout loss for the Orioles. He allowed two runs.
-It was 1957 before Duren re-emerged in the majors as a member of the Athletics. He was unimpressive, but found a home with the Yankees the following year.
-Ryne was an All-Star three times in a four-year span (1958-1961). In 1958, the 29-year-old finished second in Rookie of the Year voting while winning six and saving a league-best 20 with a 2.02 ERA out of the Yankee bullpen. He struck out 87 in only 75.2 innings, and factored in the decision of all three World Series games in which he appeared - a loss in Game One, a save in Game Three, and a win in Game Six. His ERA for the Series was 1.93.
-The righthander missed even more bats in 1959, posting a 1.88 ERA and striking out 96 in 76.2 innings (11.3 K/9 IP). He saved only 14, still good for second in the A.L. behind Chicago's Turk Lown.
-Ryne was likely one of the first relief specialists to make a dramatic entrance when called upon. He would hop the short chain-link fence to exit the Yankee Stadium bullpen and slowly stroll to the mound with his warmup jacket over his right arm. He wore thick glasses, and made a big show out of the notion that he couldn't see where the ball was going. Often his warmup pitches would sail over the catcher's head at high speeds and strike the backstop.
-After three straight subpar years with the Yanks and Angels, Ryne regained a bit of his form with back-to-back solid efforts in Philadelphia (6-2, 3.30 ERA in 1963) and Cincinnati (3.09 ERA in 1964).
-He began the 1965 season in Philadelphia, but moved on to the Senators at midseason and fell flat. His career ended when Washington released him in August. In parts of ten big league seasons he was 27-44 with 57 saves and a 3.83 ERA.
-His nephew Steven Duren supposedly played minor league ball in the Reds organization, though I couldn't find any stats for him at Baseball-Reference. One verifiable fact about Steven is that he is better known as Blackie Lawless, guitarist and vocalist for the heavy metal band W.A.S.P.
-Ryne is a recovered alcoholic, and received the Yankee Family Award in 1983 for overcoming his afflication and educating others about alcohol abuse. He collaborated with author Tom Sabellico on the book "I Can See Clearly Now", a memoir that was published in 2003. 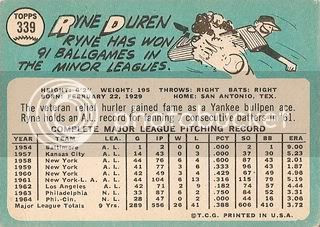