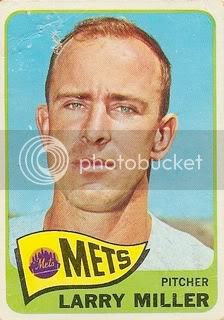 Before I saw this card, the only Larry Miller I knew was the comedian and actor. You may know him from films like The Aristrocrats, 10 Things I Hate About You, or Best in Show. Hopefully this Larry Miller never threatened to gouge a child's eye out with his thumb.
Fun facts about Larry Miller:
-Born in Topeka, KS, Larry stayed local and attended the University of Kansas before signing with the Dodgers in 1959.
-He missed two years (1962-1963) due to military service.
-After beginning the 1964 season 8-0 with a 1.68 ERA at AA Albuquerque, the 27-year-old was summoned to the big leagues in June.
-His best effort that year was a complete game seven-hitter over the Phillies on August 2. He allowed one run, striking out five and walking one.
-Funnily enough, the pitcher started his major-league career 5-for-6 at the plate, with hits in each of his first four at-bats. From that point forward, he was 5-for-33. Still, he goes in the books as a .256 career hitter!
-Miller won only four of his 12 decisions as a rookie with a 4.18 ERA.
-Traded to the Mets in 1965, he went 6-1 at AAA Buffalo but sported a 5.02 ERA as a reliever in the majors.
-His sole win for New York came on June 20, 1965. After coming on in relief of Frank Lary in the sixth inning, he allowed an inherited, game-tying run to score on a sacrifice fly. He then blanked the Dodgers for the rest of the game. The Mets scored the winning run off of Don Drysdale with a Roy McMillan squeeze bunt in the eighth to earn a 3-2 victory.
-Three abysmal games (and one good one) in September 1966 represented the last MLB exposure for Larry. He finished his career 5-14 in parts of three seasons with a 4.71 ERA.
-He stayed active in the minor leagues through the 1969 season, retiring with an overall 3.42 ERA on the farm. 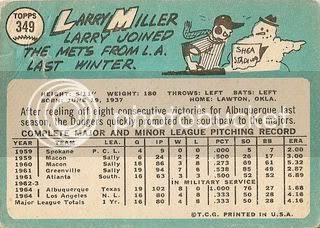