So how do you suppose that one brother gets to be named "James" and his younger brother is stuck with "Gaylord"? That hardly seems fair.
Fun facts about Jim Perry:
-A native of Williamston, NC, Jim attended Campbell University and signed with the Indians in 1956.
-He debuted with Cleveland in 1959, posting a 12-10 record in 44 games and completing eight of his 13 starts. His 2.65 ERA would have been third-best in the league, but he fell just short of the innings requirement. However, he did place second in Rookie of the Year voting to Bob Allison.
-His sophomore season was one of his most successful, as he tied for the league lead with 18 wins and four shutouts.
-Though Jim made the All-Star team in 1961, he fell to 10-17 with a 4.71 ERA. He would not get another shot at being a full-time starter until 1969.
-After spending six strong seasons as Minnesota's swingman, Perry was tabbed for 36 starts in 1969. The 33-year-old broke out with a 20-6 record and a 2.82 ERA for the first-ever A.L. West champions. He was third in Cy Young voting and ninth in the MVP race.
-1970 was even better: he led the league with 24 wins (against 12 losses) to go along with a 3.04 ERA and a career-high 13 complete games. He made his second of three All-Star Games and won the Cy Young Award.
-Jim pitched for the Twins for a decade before making a one-year stop in Detroit. In 1974, he was united in Cleveland with brother Gaylord, three years his junior. They were already the only siblings to each win Cy Young Awards, and in their only full season as teammates they combined to win 38 games: 21 for Gaylord (2.51 ERA) and 17 for Jim (2.96 ERA).
-The Perry boys faced one another only once: on July 3, 1973, Jim's Tigers topped Gaylord's Indians 5-4. Each allowed four earned runs and did not complete the game. Jim received no decision, and Gaylord took the loss, having allowed a fifth (unearned) run.
-Jim lost his effectiveness in 1975 and retired after the Athletics released him in August. In 17 seasons he was 215-174 with a 3.45 ERA, 109 complete games, and 32 shutouts.
-His son is pro golfer Chris Perry. 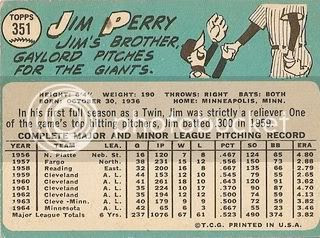