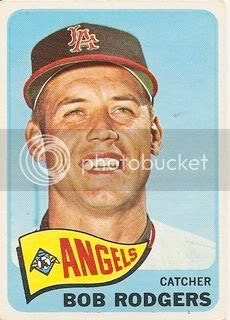 Those are some pearly whites that Bob (aka Buck) Rodgers is flashing! I hope his dentist had this card framed in his office.
Fun facts about Bob Rodgers:
-A native of Delaware, OH, Bob signed with the Tigers right out of high school in 1956.
-After five years in the Detroit organization, Bob was claimed by the Angels in the 1960 expansion draft. He made his major league debut in September of 1961, hitting .321 in 16 games.
-His first career home run came on September 29, 1961 off of Cleveland's Barry Latman. It was a third-inning grand slam that gave the Angels a 6-4 lead and capped the scoring for both clubs.
-He became Los Angeles' starting catcher in 1962 and hit .258 with 34 doubles (fifth-best in the A.L.), 61 RBI and a league-leading 34 baserunners caught stealing. His 45.9% caught stealing rate was second in the league; he would gun down 43% of would-be thieves for his career. The switch-hitting backstop also set a rookie record with 155 games caught. He was named to the Topps All-Star Rookie team and placed second in Rookie of the Year voting behind Tom Tresh of the Yankees.
-On May 5, 1962, he caught Bo Belinsky's no-hitter against the Orioles and went 1-for-3 at the plate with a double.
-Rodgers remained the Halos' primary catcher for seven years on the strength of his defense. He never approached the offensive production of his rookie year.
-He appeared in only 18 games in 1969, his career coming to a close at age 30 due to wear and tear. In parts of nine seasons he hit .232 with 31 homers and 288 RBI.
-Buck got into coaching as soon as his playing days were over, serving on the staffs of the Twins (1970-1974), Giants (1976), and Brewers (1978-1980). He also managed in the minors for the Angels (1975, 1977) and Expos (1984).
-While coaching the Brewers, he was promoted to interim manager after skipper George Bamberger suffered a heart attack in the spring. Bamberger returned for a portion of the season before stepping down and handing the reins back to Rodgers in September. The following year, Milwaukee went 62-47, including 31-22 in the second half of the strike-shortened season to advance to the divisional playoffs. There they lost a heartbreaking series to the first-half East champion Yankees, three games to two. In 1982, the Brew Crew won the East and the A.L. pennant, but did it without Buck, who was replaced by Harvey Kuenn after a 23-24 start.
-In 1985 he took over the Expos and piloted some competitive clubs, averaging nearly 84 wins over six full seasons as manager. Montreal peaked with a 91-71 record in 1987, good for third place in the N.L. East and four games back of the division champion Cardinals. In 1991, he was fired because of a 20-29 start and succeeded by Tom Runnells. The Angels hired him that August, but he completed just one full season as California's manager. In May 1992, a team bus crashed on the way from New York to Baltimore and he sustained the most serious injuries of the dozen Angels personnel who were impacted - a broken rib, broken knee, and broken elbow. He missed half of the season. In 1993, the Halos lost 91 games, shortening his leash. After another slow start in 1994 (16-24) he was let go, bringing an end to a 13-year managerial career in which he went 784-774, a .503 win percentage. 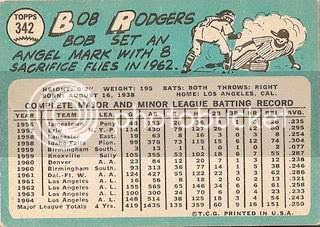