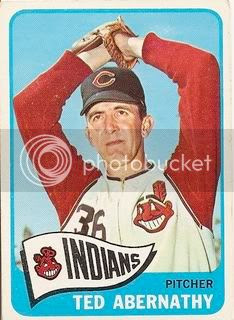 Sleeveless jerseys always seem like a good idea in theory. The next thing you know, the Cleveland Indians put on long-sleeved undershirts on a chilly spring day and it looks like everyone is in long underwear.
Fun facts about Ted Abernathy:
-Born in Stanley, NC, Ted signed with the Senators at age 19 in 1952.
-He drew attention with 20 wins and 293 strikeouts at Class D Roanoke Rapids in his first pro season.
-After he spent the next two years in the military, Washington skipped the 22-year-old straight to the majors. The results were less than encouraging: 5-9 with a 5.96 ERA in 40 games in 1955. Injuries and ineffectiveness kept him out of the majors entirely from 1958-1963, save for two games in 1960.
-When shoulder surgery left his career in doubt, he reinvented himself as a sidearm and submarine pitcher. He returned in 1963 and had a strong year out of the Cleveland bullpen, going 7-2 with a 2.88 ERA and a team-best 12 saves.
-Three times in a four-year span (1965-1968) Ted led the National League in games pitched, and twice he topped the loop in saves (31 in 1965 with the Cubs and 28 in 1967 with the Reds).
-1967 was the finest year of Abernathy's career, as he allowed just 15 earned runs (including a single home run) in 106.1 innings for a 1.27 ERA. His WHIP was a paltry 0.98.
-Twice he won ten games in relief - in 1968 with Cincinnati and in 1970 with the Cubs, Cardinals, and Royals combined. He notched double-digits saves in each season as well.
-Ted went out on top, retiring at age 39 after putting up a 1.70 ERA for Kansas City in 1972. In parts of 14 seasons he was 63-69 with a 3.46 ERA and 148 saves.
-After baseball, he made a living back in North Carolina working for Summey Building Systems. He later joined his son Todd at the latter's landscaping company.
-Ted suffered from Alzheimer's Disease for several years before passing away in 2004 at age 71. 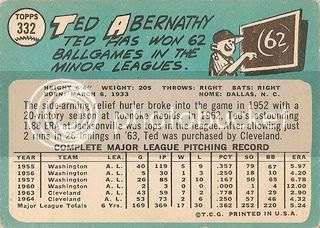