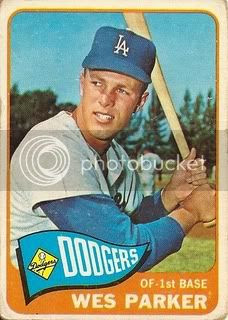 Here's the other card that I obtained through Topps' Million Card Giveaway thingamajig. Using one of my code cards, I unlocked a 1963 Jerry Kindall. First I swapped it for a 1963 Billy O'Dell, and after careful consideration, I traded the O'Dell for Wes Parker here.

-Wes was born in Evanston, IL and attended Claremont McKenna College and the University of Southern California before signing with the Dodgers in 1963.

-Known as a particularly smooth defender, he won six consecutive Gold Gloves at first base (1967-1972).

-Wes had a banner year in 1970, leading the Dodgers with a .319 average and 111 RBI despite totaling only 10 home runs. His league-high 47 doubles were a contributing factor. He finished fifth in MVP voting.

-Parker hit for the cycle on May 7, 1970 in a 7-4 win over the Mets. He drove in three runs, including a game-winning two-run triple off of Jim McAndrew in the tenth inning.

-After broadcasting Reds games in 1973, he played one more season with the Nankai Hawks in Japan. He batted .301 with 14 home runs and won the Diamond Glove Award.

-Wes also called games for NBC and USA in the late 1970s and early 1980s, and did some acting as well. He had guest spots on shows like The Brady Bunch and MacMillan and Wife. You can see his full filmography here. 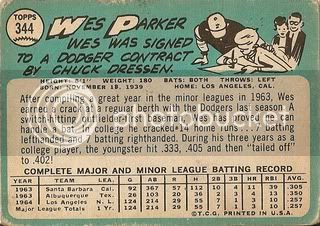