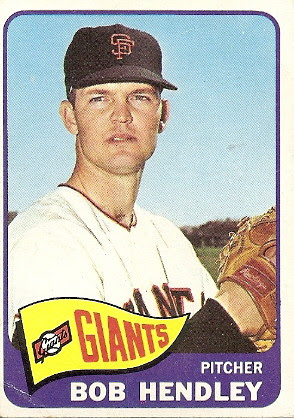 Check out the product placement on this card! Pitcher Bob Hendley is flashing his Rawlings leather for all of the world to see. I hope he at least got a few free gloves out of them. Incidentally, I took a close look at Donn Clendenon's glove as I was scanning his card yesterday, and he had a Spalding. There was also a facsimile signature on the heel, but I just couldn't make it out. This concludes today's edition of GloveChat.

Hailing from Macon, Georgia, Bob Hendley signed with the Milwaukee Braves in 1958 as a fireballer, but an elbow injury in 1960 cost him much of his velocity. He made it to The Show in 1961, having to rely on deception to stay ahead of hitters. The 22-year-old went 5-7 with a 3.90 ERA as a rookie and became a full-time member of the starting rotation the following year. That sophomore campaign would be his best, as he threw exactly 200 innings and won 11 games against 13 losses with 7 complete games and a 3.60 ERA that was slightly better than league average. After splitting time between the bullpen and the rotation in 1963 (9-9, 3.93), the lefty was dealt to the Giants in a seven-player trade that brought Felipe Alou to Milwaukee.

In his only full season in San Francisco, Bob was a ten-game winner with a 3.64 ERA. After a brutal start to 1965 (21 ER in 15 IP), he was traded to the Cubs and got back on track somewhat. He only started 10 of his 18 games with Chicago, but two consecutive starts in September proved to be very memorable. On September 9 at Dodger Stadium, he mowed down the opposition, allowing just one hit and one walk. Unfortunately, the batter he walked (Lou Johnson) was sacrificed to second, stole third, and scored on catcher Chris Krug's wild throw. Meanwhile, opposing pitcher Sandy Koufax pitched a perfect game and Hendley took a 1-0 loss. Time of game: 1 hour, 43 minutes. But five days later there was a rematch at Wrigley Field and Bob got his revenge, twirling a four-hitter to beat Koufax 2-1. In a two-game span, the southpaw lowered his ERA by two full runs!
The Cubs slotted Hendley in the bullpen for much of 1966, and he had his usual mediocre season (4-5, 7 saves, 3.91 ERA). He split the next year, his last in the majors, between Chicago and the Mets, going 5-3 with a 3.90 ERA. In seven seasons, he won 48, lost 52, and compiled a 3.97 ERA.
After retirement, Bob returned home to Georgia and coached high school baseball. He had the opportunity to coach his sons, Bart and Brett, as well as current major leaguer Russell Branyan. Both sons would go on to play collegiately, with Brett spending time in the Athletics organization afterward.

Fun fact: Bob must have seen Frank Howard in his nightmares! "Hondo" hit eight home runs and batted .366 against him. 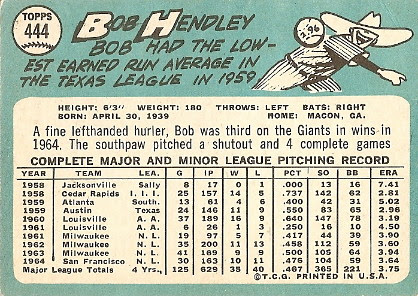