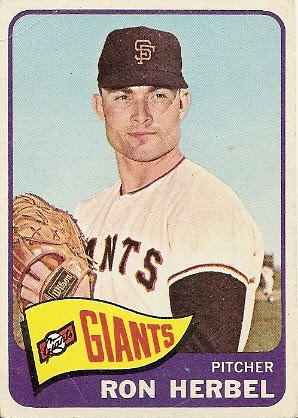 There are lots of fun details to this Ron Herbel card. There's the closeup of his Wilson glove, the simple Giants jersey insignia, and the tiny, blurry teammate on the diamond behind him. Of course there's also Ron himself, who looks like the coolest cat on the field. Ohhh yeah.

-His first full season in the major leagues was his best. As a swingman with the 1964 Giants, he went 9-9 with seven complete games and a 3.07 ERA.

-In 1970, Ron led the National League with 76 games pitched, all but one in relief. He tossed 124 innings between the Padres and Mets, going 9-7 and finishing 38 games.

-With a career batting average of .029 (6-for-206), Herbel is the worst hitter in major league history with at least 100 at-bats. That's a -70 OPS+. He did hit two doubles, at least. Said Herbel, "I hit 10 homers my senior year in high school. But I didn't have to face Koufax and Drysdale in high school."

-Another amusing quote, this one from Bob Uecker: "I hit a grand slam off Ron Herbel and when his manager Herman Franks came out to get him, he was bringing Herbel's suitcase." To be fair, Herbel actually stayed in after giving up the granny and pitched a scoreless inning and one-third. The damage had been done, and the Giants lost to the Braves, 9-2.

-I should also mention that Ron Herbel is unfortunately one of those players who has sparse biographical information online; even Wikipedia and the Baseball Reference Bullpen are pretty bare. A Yahoo search for his name turned up the checklist page of my blog in the first ten results. 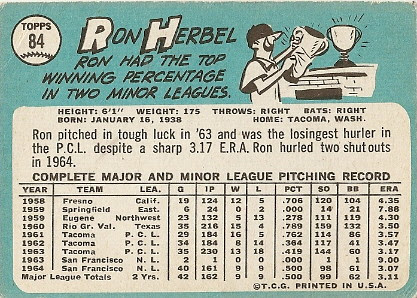