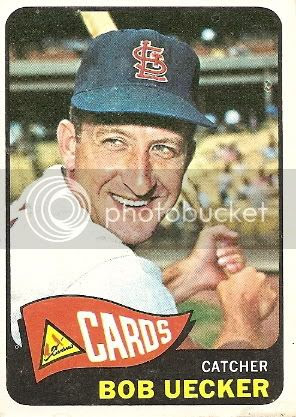 At long last, we come to Ueck! I am not dealing in hyperbole when I tell you that this is my absolute favorite card in the set, the one that I have been waiting with bated breath to show off and discuss. Before I was truly wedded to the idea of acquiring this set via trades and donations, I spent some time fruitlessly bidding for this masterpiece on eBay. It’s highly sought after not only because of the cult status of its subject, but because it comes from the rarer “high-numbered” series. It’s also considered an error card, as it shows the righthanded catcher batting lefty. However, no correction was issued.
I have just a few more notes about this card. The copy writer responsible for the card back did yeoman’s work, not only mentioning Uecker’s reputation as a joker but including a seemingly sarcastic reference to his receipt of a full World Series winner’s share despite his lack of action in the postseason. That sentence was so loaded, it could have been written by Bob himself. Lastly, the most astute among you have probably noticed that the banner image at the top of this blog features a set of mischievous eyes peering out at you…and those eyes belong to none other than Bob Uecker.
Fun facts about Bob Uecker (with corresponding quotes):
-The Braves signed Milwaukee native Uecker in 1956 at age 21; he would not debut with the club until his seventh pro season. “I signed with the Milwaukee Braves for $3,000. That bothered my dad at the time because he didn’t have that kind of dough. But he eventually scraped it up.”
-He finally made it to the bigs in 1962, hitting .250 in 64 at-bats. “You know, I was once named Minor League Player of the Year…unfortunately, I had been in the majors for two years at the time.”
-In a six-year career with the Braves, Cardinals, and Phillies, Bob never started (topping out at 207 at-bats with Philly in 1966). He committed 27 errors in 1,436 career chances for a solid .981 fielding percentage. “How do you catch a knuckleball? Wait until it stops rolling, then go to the backstop and pick it up.”
-Overall, he was an even .200 hitter with 14 home runs and 74 RBI. “Anybody with ability can play in the big leagues. To last as long as I did with the skills I had, with the numbers I produced, was a triumph of the human spirit.”
-He did make his few longballs count, victimizing Hall of Famers Sandy Koufax, Gaylord Perry, and Fergie Jenkins. “I hit a grand slam off Ron Herbel and when his manager Herman Franks came out to get him, he was bringing Herbel’s suitcase.”
-After his playing career ended, he spent some time working in public relations for the Braves before getting into broadcasting with the Brewers in 1970. He has been the voice of the Brew Crew for many of the ensuing years. He’s also called regular season and playoff games on ABC and NBC. “Well, a couple of grand slammers and the Brewers (down 8-0 in the eighth inning) are right back in this one.”
-Uecker became a household name through appearances on Johnny Carson’s Tonight Show (74 in all!), Miller Lite beer commercials, and a late-blooming acting career that included the TV sitcom Mr. Belvedere and the “Major League” film series. “Juuuust a bit outside.” (Said as a fictitious Indians pitcher heaves the ball wildly)
-My personal favorite Bob Uecker moment came during Wrestlemania IV, a 1988 WWF pay-per-view that featured Ueck as a guest interviewer and announcer. He had the unenviable task of eliciting a few words backstage with the legendary Andre the Giant, and became perturbed when the Frenchman rested a massive hand on his much smaller frame: “Hey buddy, you mind getting your foot off of my shoulder?” Andre responded by choking the daylights out of him, stopping to grin at the camera, and lumbering away.
-In 2005, the Brewers inducted him into their Ring of Honor to commemorate his 50th year in pro baseball. In 2009, the club also added him to the Braves Wall of Honor at Miller Park. “Baseball hasn’t forgotten me. I go to a lot of Old Timers games and I haven’t lost a thing. I sit in the bullpen and let people throw things at me. Just like old times.”
-Believe it or not, Uecker was inducted into the Baseball Hall of Fame in 2003…as a recipient of the Ford C. Frick Award for broadcasters. “I should have gone in as a player.” 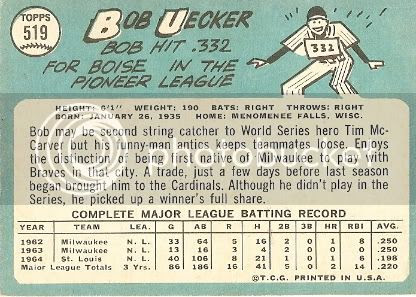