Aubrey Gatewood is one of only three men in major league history named "Aubrey". The first was Aubrey Epps, a catcher who played a single game for the Pirates in 1935, and the other is Aubrey Huff, the power-hitting first baseman whose home run last night provided the Giants with the winning runs in Game Four of the World Series.

-A native of Little Rock, AR, Aubrey attended Arkansas State University before signing with the Tigers in 1959.

-The Angels claimed him in the expansion draft, and three years later gave him a look in the majors. In his debut on September 11, 1963, he earned the victory with a complete game four-hitter as L.A. beat the Red Sox 4-1.

-He held his own in two more starts and a relief appearance to finish September with a 1.50 ERA, but poor run support kept him from any more wins.

-Gatweood spent the second half of the 1964 season back with the Angels and looked strong in relief but often struggled in starts. He had a 2.24 ERA overall in 60.1 innings.

-After developing arm troubles, Gatewood learned to throw a knuckleball. But the results were inconsistent, and he languished in the minors for the next four-and-a-half years. During that time he became the property of the Reds, then the Orioles, and finally the Braves.

-Atlanta promoted him to the majors in June of 1970, nearly five years after he'd last thrown a big league pitch. He had two effective relief outings before a disastrous attempt at mop-up work on July 8. With the Braves trailing the Giants 6-0 in the fifth inning, he allowed a runner that he'd inherited from Phil Niekro to score, and a run of his own as well. With two on and two out, he looked to have escaped further damage when he coaxed a ground ball from Willie Mays. But shortstop Sonny Jackson booted it and both runners scored. Willie McCovey received an intentional pass, and Dick Dietz walked to load the bases for Jim Hart. Hart cleared the bases with a triple, and Gatewood was yanked with the Braves in a 13-0 hole. He'd allowed six runs in one-third of an inning, but only one of them was earned. Nonetheless, it was the last game he ever pitched in the majors.

-In parts of four MLB seasons, he was 8-9 with a 2.78 ERA. His complete game in his debut was the only one of his career. He pitched in the minors through the 1971 season. 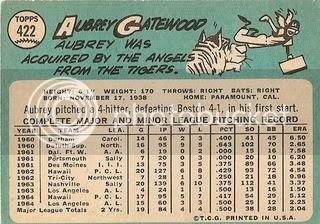