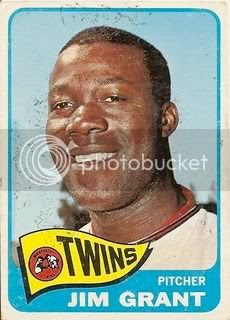 When I was 11 years old (way back in 1993), the Ted Williams Card Company produced a set of cards featuring prominent players from the 1930s-1970s. I bought some packs, and one of the cards I pulled featured this gentleman and referring to him by his nickname: "Mudcat" Grant. He got the moniker from roommate Larry Doby, who said that Grant was "as ugly as a Mississippi Mudcat". It's a shame that baseball nicknames aren't that mean-spirited any more, huh? Oh, and a late note: I just noticed that the border color is light blue, and not purple like the rest of the Twins in this set. Error card!

-Jim grew up in tiny Lacoochee, FL, with eight siblings. His mother raised the children alone after his father died. Jim signed with the Indians in 1954.

-1965 saw Grant lead Minnesota to the World Series with a 21-7 record and a 3.30 ERA; he was the first black pitcher to win 20 games in American League history. The Sporting News named him Pitcher of the Year. He made a second All-Star squad and paced the A.L. in wins, win percentage, and shutouts (six). He earned complete-game victories in the first and sixth game of the Series, and even belted a three-run homer off of the Dodgers' Howie Reed in the sixth inning of Game Six. He was hit around a bit in the fourth game, but his overall Series stats of 2-1 with a 2.74 ERA are nothing to sneeze at.

-His final big league appearance came in Game Three of the 1971 ALCS, when he shut out the Orioles for two innings in relief. His last batter faced was Jim Palmer, and he struck of the future Hall of Fame pitcher.

-After retiring, Grant did some broadcasting for the A's, Dodgers, and Indians, and also worked in Cleveland's front office. He has been active with the Negro Leagues Baseball Museum, the Baseball Assistance Team, and the MLB Alumni Association. Through his website The Black Aces and a book of the same name, he has promoted the 13 black pitchers who have had 20-win seasons in MLB and encouraged links among them. 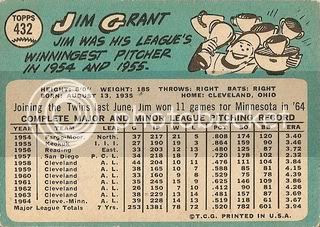