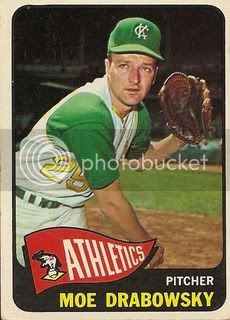 You can just sense the mischief in Moe Drabowsky's face in this picture. Something about those eyes...we know what you're up to, Number 25.

Fun facts about Moe Drabowsky:
-Moe was born in Ozanna, Poland and emigrated to Connecticut with his parents at age three. He pitched for Trinity College in Hartford, CT, and signed with the Cubs in 1956 for a $75,000 bonus.

-Reporting right to the major leagues, he pitched like he belonged, completing three of his seven starts with a 2.47 overall ERA.

-1957 would prove to be Drabowsky's only full season as a starter. He won 13 games but lost 15 for a seventh-place Chicago club. His 3.53 ERA was the best on the team, and his 170 strikeouts tied him with teammate Dick Drott for second-best in the National League behind Jack Sanford of the Phillies.

-Arm troubles in 1958 curtailed his effectiveness. In a three-year span from 1960-1962 he played for four teams: the Cubs, Braves, Reds, and Athletics.

-Moe signed with the Orioles in 1966 and experienced a career renaissance in the Baltimore bullpen. In his first three seasons with the team, he was 17-9 with a cumulative ERA of 2.14 and a WHIP of 0.958. He also saved 26 games.

-He earned the Birds' first-ever postseason win in Game One of the 1966 World Series. Starter Dave McNally got a quick hook from Hank Bauer after walking the bases loaded with one out in the third inning. Drabowsky walked Jim Gilliam to cut Baltimore's lead to 4-2. But he stranded three base runners and was untouchable for the rest of the game. In six and two-thirds innings, he allowed two walks and a single hit and struck out 11 (a single-game Series record for a reliever), including six whiffs in a row.

-Moe was one of the legendary characters of the game, famous for his pranks. Highlights include: multiple hot-foots (including one given to Commissioner Bowie Kuhn during the 1970 World Series), calling the opposing bullpen and convincing their relievers to warm up, and terrorizing skittish teammates with snakes. You can read a few stories about the reliever's greatest hits on my other blog.

-After his playing career ended, Drabowsky coached in the minors for the White Sox and Orioles, and was on the major league staffs of the White Sox (1986) and Cubs (1994). He passed away at age 70 in 2006 after a battle with multiple myeloma. 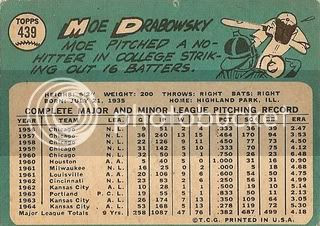