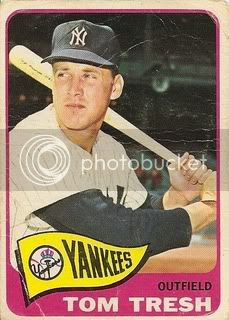 Tom Tresh looks like he's wearing a batting glove on his right hand, a rare sight in the 1960s. Either that, or he was just washing the dishes in the Yankee clubhouse.

-A Detroit native, Tom attended Central Michigan University before signing with the Yankees in 1958.

-His father Mike was a catcher for the White Sox and Indians from 1938 through 1949.

-After a September 1961 debut, Tresh was New York's starting shortstop in 1962; he replaced Tony Kubek, who was serving in the military at the time. The newcomer batted .286 with a .359 on-base percentage and slugged 26 doubles and 20 homers. His 93 RBI were the second-highest total on the club. He received the first of two straight All-Star selections, and was the American League's Rookie of the Year.

-Tom made a big contribution to the Yanks' World Series win, batting .321 (9-for-28). His three-run homer off of Jack Sanford in the bottom of the eighth inning in Game Five broke a 2-2 tie and wound up being the game-winning clout.

-When Kubek returned in 1963, Tresh shifted to the outfield and adjusted well. He won a Gold Glove in 1965 while getting most of his starts in center field.

-On June 6, 1965, he went 4-for-5 with three home runs and five RBI in the second game of a doubleheader against the White Sox.

-Though he never matched his .286 rookie-season batting average, Tom remained a valuable offensive player throughout his career due to his power (he hit 20 homers in four of his first five seasons, peaking with 27 in 1966), and drawing plenty of walks (an average of 75 per 162 games in his career).

-After a season and one-half of sub-.200 averages, the Yankees traded him to his hometown Tigers in June of 1969. He hit .224 with 13 home runs in 94 games for Detroit, and was released the following April to bring his career to an end.

-He spent many years working at Central Michigan University as an assistant placement director. He was partially responsible for the invention of the Slide-Rite, a training tool to teach young athletes how to properly slide and dive. Tom suffered a fatal heart attack on October 15, 2008 in his home in Venice, FL. He was 70 years old. 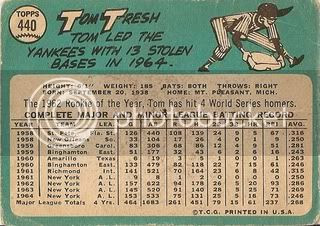