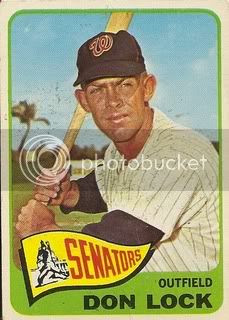 Did you notice the schmutz on the front of this card, giving it a mottled look? I have a few cards like that from this set. I suppose they were in one of those photo albums with a cellophane sheet and an adhesive backing, or something else of the sort.

-A Wichita, KS native, Don stayed in town for college and was a two-time all-conference player for the Wichita State Shockers. He signed with the Yankees in 1958.

-He suffered the fate of many talented players before him, failing to crack the New York roster despite hitting 96 home runs in a three-year span in the minor leagues. One year, he made light of his impending cut from the big league camp in spring training by crossing his name off of his locker and barricading himself inside, firing his bat like a rifle at anyone that came near him.

-After a July 1962 trade to the Senators, Lock finally made his big league debut at age 25. He hit a solo home run against Juan Pizarro in his first game. Despite playing only 71 games that year, he tied for second on the team with a dozen longballs.

-In his sophomore season, Don established himself as Washington's most potent offensive weapon, pacing the club with 27 home runs, 82 RBI and 70 walks. He also played a solid center field.

-In the mid-sixties, Lock had a few down years and was traded to the Phillies for the 1967 season. Playing in a reduced role, he slugged 14 home runs and drove in 51 in 313 at-bats. Dick Allen was the only Philly batter to out-homer him.

-He hit six walkoff home runs in his career, including four in extra innings. One was a grand slam in the bottom of the 13th. He also hit a pair of game-winning two-run homers to erase 1-0 deficits in the bottom of the ninth: On July 29, 1963, Chuck Hinton got the first Senators hit off of Joe Horlen with one out in the ninth. The Chicago hurler then retired Bobo Osborne before Lock robbed him of a shutout and a win. Three years later, Don again struck gold with two outs in a 1-0 game, this time taking Johnnie Wyatt deep in a pinch hit role.

-Lock spent three more years in the minors as a manager, compiling a 180-234 record with the Winston-Salem Red Sox, Pawtucket Red Sox, and Wilson Pennants from 1971-1973.

-He was inducted into the Kansas Baseball Hall of Fame in 1974. Nearly four decades later, he still makes his home in Kingman, KS, which as far as I know is not named for disagreeable slugger Dave. 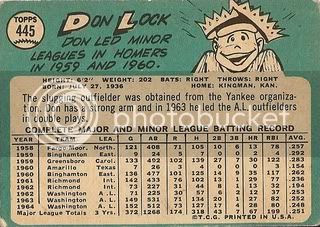