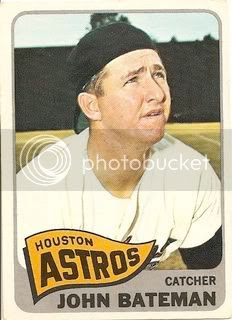 You can see a hint of John Bateman's Colt .45s uniform peeking out from behind the pennant design on the card. Those were pretty sharp jerseys, I must say.

-His playing time took a big hit during his second and third seasons as his offensive production dipped, but he rebounded in 1966 and reached career highs in average (.279), doubles (24), home runs (17) and RBI (70). He set an Astros record by hitting 16 of those homers as a catcher; incredibly, that mark still stands 45 years later!

-When Houston acquired Johnny Edwards after the 1968 season, they exposed Bateman to the expansion draft. The Expos claimed him with their sixth pick and made him their starter, but he struggled mightily and drove in just 19 runs in 249 plate appearances.

-Though he never did hit for high averages (.234 in three-plus seasons in Montreal), he regained his starting job in 1970 and 1971 and combined for 25 homers and 124 RBI in that span. He also threw out 44% of attempted base stealers in the former year.

-Had a monster day on July 2, 1970: 3-for-5 with 7 RBI, including a first-inning grand slam off of Mike Torrez. He finished a triple short of the cycle as the Expos outslugged the Cardinals 13-10.

-On September 29, 1970, he hit the final home run in Philadelphia's Connie Mack Stadium.

-During the late 1970s John played for Eddie Feigner's King and His Court softball team, a traveling four-man squad that would take on full nine-and-ten-man teams. He died in 1996 at age 56 of unreported causes. 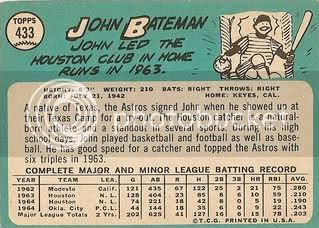