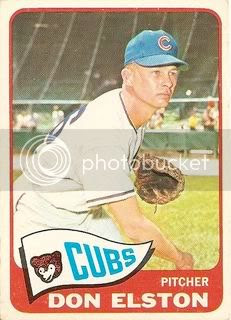 This is Don Elston's final baseball card. I'll give you a moment to compose yourselves. You can see half of Don's uniform number on his back; he wore #36 with the Cubs. According to Casey Ignarski's well-researched website, other notable Cubbies to wear that number included first baseman Eddie Waitkus and pitcher Robin Roberts.

-He made his major league debut at age 24, on September 17, 1953. Also playing in his first big league game for the Cubs that day was shortstop Ernie Banks.

-Elston was hit hard in two games in 1953, and did not resurface in the majors until 1957. By that time, he was with the Dodgers. After only one appearance for Brooklyn, he was reacquired by the Cubs. This time, Chicago kept him around for eight seasons.

-After fashioning a 3.56 ERA, a 6-7 record, and 8 saves in 39 games as a rookie, Don became the go-to guy out of the Cubs bullpen. "Everyday Elston" averaged 58 games pitched in his seven full seasons on the North Side, leading the National League in that category in 1958 and 1959.

-An All-Star selection highlighted Don's 1959 season, when he had a 3.32 record and career highs of 10 wins and 13 saves. He earned the save in the first of that year's two All-Star games, pitching a scoreless ninth and stranding Nellie Fox as the tying run on second base.

-He managed the Cubs' California League team, the Lodi Crushers, in 1966. He was let go before season's end with a 59-81 record. He stayed in Chicago after baseball, working in sales and remaining involved in charitable causes. In January 1995, he suffered a fatal heart attack at age 65. 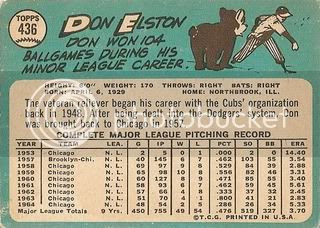