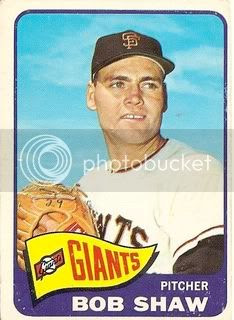 If you noticed the "29" on Bob Shaw's glove, I can confirm that it was his uniform number with the Giants. That's the kind of thing that's up my alley.


Fun facts about Bob Shaw:
-﻿Bob was born in the Bronx and attended St. Lawrence University in New York before signing with the Tigers in 1953.
-He debuted with Detroit in 1957 at age 24, but won just one game for the club before being dealt to the White Sox in midseason the following year.
-Shaw had a career year in 1959, as he led the league in winning percentage (18-6, .750) and posted a 2.69 ERA. He was third in the A.L. in wins and ERA despite starting only 26 games (he relieved in 21 more). He finished third in Cy Young voting, as teammate Early Wynn captured the honors.
-After being tagged with a 4-3 loss in Game Two of the 1959 World Series, he bounced back to shut out the Dodgers over 7.1 innings and outduel Sandy Koufax in a 1-0 Chicago win in Game Five. Ultimately, L.A. prevailed in six.
-Bob could not follow up on his great season, turning in two average years with the White Sox and Athletics. A pre-1962 trade to the Braves seemed to rejuvenate him, as he earned his lone All-Star selection in his first season in Milwaukee (15-9, 2.80 ERA, 12 CG). He also led the National League with only 1.8 walks allowed per nine innings.
-On May 4, 1963, he set a major league record by committing five balks in a single game, including three in the third inning alone!
-Shaw was shifted to the bullpen and led his team in saves in 1963, when he shut the door 13 times for the Braves, and in 1964, when he earned 11 saves for the Giants.
-He did not let another change in roles bother him, as he started 33 games for San Francisco in 1965 and went 16-9 with a personal-best 2.64 ERA. He was the second-best pitcher on a staff that included Juan Marichal (the team ace), a still-learning Gaylord Perry, and Jack Sanford and Warren Spahn as elder statesmen.
-Bob retired after pitching for the Mets and Cubs in 1967. In parts of 11 seasons he was 108-98 with a 3.52 ERA and 32 saves.
-He stuck around as a minor league manager and major league pitching coach for the Dodgers and later coached for the Brewers before embarking on a successful second career in real estate in Florida. He died this past September of liver cancer at age 77. 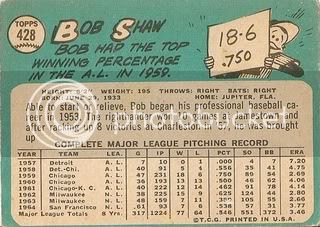