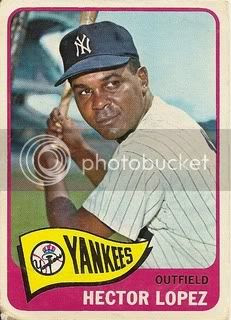 I thought for sure this might be the only "Hector" in the set, but Hector Valle appeared on the Dodgers' Rookie Stars card #561. Lopez is still the best Hector in the set, anyhow.

-A native of Colon, Panama, Hector began playing unaffiliated pro baseball while still in high school. The Athletics signed him in early 1952, when he was 22 years old.

-In May 1955, he debuted with Kansas City (becoming only the second Panamanian to play in the majors) and started most frequently at third base, also moving over to second on occasion. He hit .290 with 15 home runs and 68 RBI in 128 games, making him one of the top rookie hitters that year.

-He was an offensive leader for the dreadful A's, leading the club in his sophomore season with 91 runs scored, 27 doubles, and 63 walks. His 18 homers and 69 RBI were second on the team, bested only by Harry Simpson.

-On June 26, 1958, Lopez punished Senators pitching to the tune of three home runs and five RBI. His final four-bagger was a game-winning two-run shot in the last of the 12th against Vito Valentinetti.

-He was traded to the Yankees in the midst of the 1959 season and responded with career highs of 22 home runs and 93 RBI.

-Hector spent most of his tenure in the Bronx as a part-time outfielder, but did help the Yanks crush the Reds in five games in the 1961 World Series with seven RBI, five coming in the Game Five clincher via a triple, a bunt, and a three-run homer.

-Lopez was not known for his defensive skill, routinely placing among the league leaders in errors at his position.

-He last played in the majors with the 1966 Yankees, and subsequently spent two years at AAA in the Senators organization. In parts of 12 MLB seasons, he batted .269 with 136 home runs and 591 RBI.

-Washington tabbed Hector to manage their AAA Buffalo team in 1969, making him the first black skipper at the highest level of the minors. He spent just one year in that position, but managed in Venezuela and Panama as well. He was also manager of the rookie-level Gulf Coast Yankees in 1993-1994. Most recently, he helmed his home country's World Baseball Classic team in 2009. 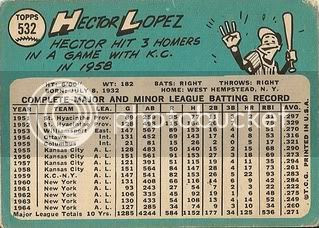