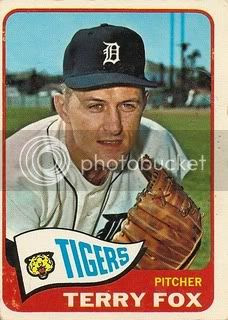 It just occurred to me that most of the 1965 Topps cards that I own are pretty well-centered. This one, of course, is ridiculously miscut. No biggie.

-A Chicago native, Terry began his pro career with the New Iberia (LA) Pelicans of the Evangeline League. He went 21-12 with a 2.95 ERA for the club in 1955, and the Braves subsequently acquired him.

-He won 21 games in relief over two seasons at AAA Sacramento to earn a September callup in 1960. The 25-year-old allowed 4 earned runs in 8.1 innings out of the Milwaukee bullpen.

-Fox joined the Tigers the following season via trade and immediately became a relief ace, allowing only 9 earned runs in 57.1 innings (1.41 ERA) and going 5-2 with a team-leading 12 saves.

-He earned his first career win with four strikeouts in three innings of scoreless relief on April 19, 1961. The Tigers trailed Cleveland 2-1 when Fox replaced Jim Bunning in the seventh inning, and he held down the Tribe as Detroit rallied for four runs in the eighth.

-Terry again paced Detroit pitchers with a career-high 16 saves in 1962. His earned run average was a paltry 1.71.

-Overall, he led the Tigers in saves in four out of his five full seasons with the team, totaling 54 saves in that span.

-Fox seemed to lose his touch at age 30, allowing 7 earned runs (and 3 home runs) in 10 innings before being shipped off to the Phillies in May 1966. His ERA in Philadelphia came down a bit, but was still a mediocre 4.47.

-The Phils sent him down to AAA San Diego in 1967, and he spent his last professional season there.

-At last check, he was still making his home in New Iberia, LA. 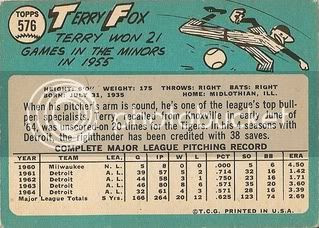