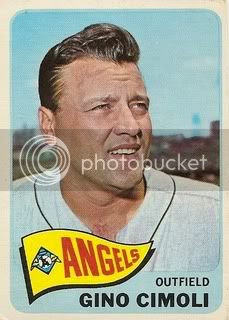 Wow, Gino Cimoli is impeccably coiffed. His pompadour has a pompadour.

-Gino was born in San Francisco and signed with the Dodgers as a teenager in 1949.

-His first two home runs as a Dodger were both notable. On April 16, 1957, he handed future Hall of Famer Robin Roberts a 12-inning complete game loss with a solo shot. On May 6 of that year, he hit his only walkoff homer to give Brooklyn a 14-inning win over the Braves. The latter home run gave young reliever Sandy Koufax his fifth career win.

-After being dealt to the Cardinals, he hit .279 with a personal-best 72 RBI in 1959, his lone season with the club. His 40 doubles were fourth-most in the National League, and he placed eighth with 7 triples.

-Cimoli served as the fourth outfielder for the 1960 Pirates, but started five of the seven World Series games after Bob Skinner hurt his thumb. He filled in admirably, scoring four runs and batting .250 in the Fall Classic. His pinch single in the deciding game sparked a five-run Pittsburgh rally and set the stage for Bill Mazeroski's dramatic home run in the ninth inning.

-He played sparingly for the Pirates and Braves the following year, but found himself back in the starting lineup after being drafted by the Athletics. In 1962, he led the American League with 15 triples. Though the rest of his offensive numbers dipped in 1963, he banged out another 11 triples to place fourth in the league.

-Gino's decline came on abruptly. He saw action in just 42 games in 1964, batting .119 with the A's and Orioles before being demoted to AAA Rochester. The Angels barely used him the next year before releasing him in May. In parts of ten seasons, he hit .265 with 44 home runs and 321 RBI.

-In his post-baseball career, Cimoli became a UPS driver. In 1990, the company honored him for 21 years of service without a single traffic accident. He was light-heartedly referred to as "the Cal Ripken of UPS". 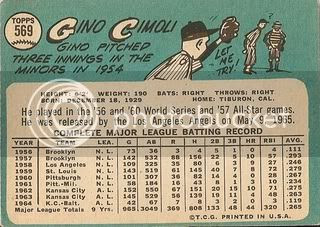