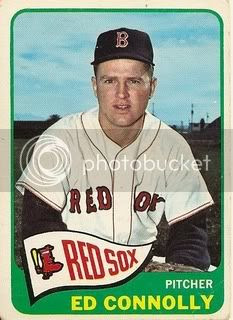 Thanks to an incidental fold in the fabric, it looks like Ed Connolly's jersey says "Red Ox". It occurs to me that this would be a good nickname for a husky Midwestern first baseman with red hair.

-Ed was born in Brooklyn, NY, and attended the University of Massachusetts at Amherst before signing with the Red Sox in 1961.

-Despite underwhelming minor league stats, the younger Connolly made Boston's opening day roster in 1964 and remained on the team throughout the year.

-Ed earned his first career shutout on September 15, 1964, two-hitting the A's while walking five and striking out a dozen in an 8-0 Boston romp. He also singled off of John O'Donoghue for his first career RBI.

-The rest of his rookie year did not go so smoothly. The youngster was 4-11 overall with a 4.91 ERA as he shuttled between the rotation and bullpen. He walked an incredible 64 batters in 80.2 innings, an average of 7.1 per 9 innings pitched, and placed fourth in the league with 11 wild pitches.

-The Sox returned Connolly to the minors in 1965, and he was actually demoted to AA Pittsfield the following year, after which Cleveland selected him in the minor league draft.

-One of the few bright spots that year was a start on August 8; the southpaw whiffed 11 Baltimore batters in 8 innings as Cleveland bested the Orioles 5-3. 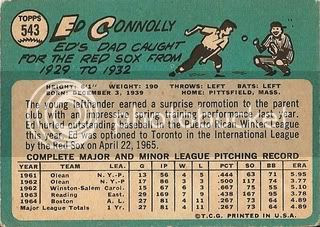