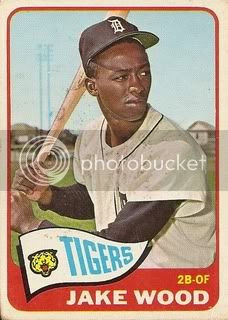 The name "Jake Wood" just makes me think of the Blues Brothers, since it's like a mashup of Jake and Elwood. I'm on a mission from God to tell you about Jake Wood. In a bizarre bit of coincidence, Jake Wood is also the name of the British actor who currently voices the Geico Gecko in those endless ubiquitous TV and radio ads.

-A native of Elizabeth, NJ, Jake signed with the Tigers in 1957 after attending Delaware State University.

-His younger brother, Richard Wood, was an NFL linebacker for the Jets and Buccaneers (1975-1984).

-Jake spent four years in the minors and hit .300 or better in each season with a good combination of power and speed. He won Detroit's second base job in the spring of 1961 at age 24.

-Wood played all 162 games for the Tigers in his rookie season, and finished sixth in Rookie of the Year voting. He batted .258 with 96 runs scored, 17 doubles, 14 triples, 11 home runs, 69 RBI, and 30 steals. He led the American League in triples, but also set a new major league record with 141 strikeouts. The following year, Harmon Killebrew took him off the hook by whiffing 142 times.

-His performance declined across the board in 1962, as he hit .226 in 111 games. Jake struggled with injuries that season and the next, lost his starting job, and never topped 400 plate appearances again.

-On May 8, 1963, he twice hit game-tying home runs against the Yankees in a game that ended 7-6 in favor of the Tigers. As the first batter of the game for the host Tigers, he took Stan Williams deep to knot it at 1-1. Facing Jim Bouton in the bottom of the sixth, he re-tied the game at five with another solo shot. Overall, Jake had seven home runs to lead off a game in his career.

-If you're looking for coincidences, Wood's eighth-inning double on April 18, 1965 spoiled Rudy May's no-hit bid in the latter's debut. May, of course, was featured on this very blog three days ago! 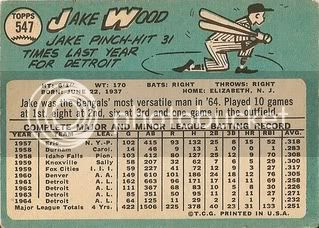