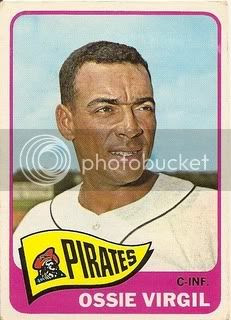 I believe that the Commish commented on yesterday's post suggesting that this was "Hatless guys with oily hair week" on the blog. Lo and behold, it's another bare-headed wonder! Remember, I'm just posting these cards in the order I received them.

-Ozzie was born in Monte Cristi in the Dominican Republic. He honed his baseball skills while serving in the U.S. Marine Corps (1950-1952) and signed with the Giants in 1953.

-When he debuted with the Giants late in the 1956 season, he became the first Dominican native to play in the majors. He paved the way for future stars such as Juan Marichal, Sammy Sosa, and Pedro Martinez.

-In 1957, Virgil played in a career-high 96 games, spending time at four positions: third base, shortstop, and the outfield corners. He batted .235 with 4 home runs and 24 RBI.

-He became the first dark-skinned player in Tigers history when he joined the club via trade in 1958. On June 17 of that season, he went 5-for-5 with a double and a run scored in his first-ever game at Detroit's Briggs Stadium.

-Ozzie spent more time in the minors than the majors, totaling 1491 games in parts of 13 minor league seasons with a .285 average.

-From 1969 through 1988, Virgil coached for the Giants, Expos, Padres, and Mariners. The last 13 years of his time as an MLB coach were all spent under Hall of Fame manager Dick Williams. In 1996, he managed the Giants' Class A Bellingham farm team for 38 games.

-In 2006, his native province opened the Osvaldo Virgil National Airport, offering domestic flights to and from other Dominican cities. 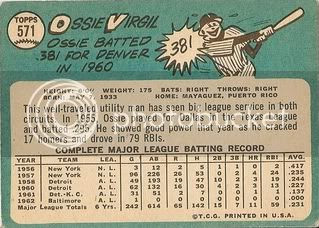