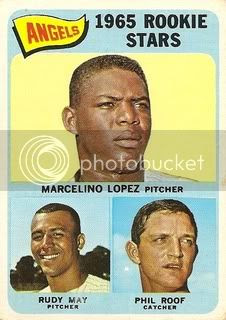 It's disorienting to see Rudy "The Dude" May without his famous oversized glasses. Also, I wonder if Rudy and Phil were jealous of Marcelino for nabbing the top half of the card all for himself.

-A native of Havana, Cuba, Marcelino was barely 16 when the Phillies signed him in 1959.

-His record in the minors was uneven, but the Phils placed him on their major league roster in April 1963. The 19-year-old only totaled six innings in four appearances, but did earn his first win on April 20 by limiting the Cardinals to two runs in five innings.

-Acquired for Vic Power after the 1964 season, Lopez threw 215.1 innings for the Angels as a rookie in 1965. He went 14-13 (putting him one off of Dean Chance's team-leading win total) with a 2.93 ERA. He narrowly lost the Rookie of the Year vote to Baltimore's Curt Blefary, but did make the Topps All-Star Rookie Team.

-Marcelino did not fare so well in his sophomore season. His ERA jumped by a full run and his record was a woeful 7-14. He also led the A.L. with nine hit batsmen.

-However, he did pitch the game of his life on September 23, 1966. Facing the soon-to-be World Champion Orioles, he allowed three hits and two walks while striking out a dozen O's batters. It was the third and final shutout of Lopez's career. Even though a glimpse at the box score indicates that Hank Bauer was resting his starters, that shouldn't take away from a great performance.

-He was traded to the pitching-rich Orioles in June 1967 and appeared in four games for them that year, apparently suffering from a sore arm. The club kept him in the minors for the entire 1968 season and some of the next year as well.

-Lopez served as a long reliever in the Baltimore 'pen for much of 1969, winding up with a 4.41 ERA in 69.1 innings. His performance was uneven, but highlights included a win against his old club on June 10. The Cuban replaced O's starter Tom Phoebus in the fourth inning and held the Angels hitless for the rest of the game, walking a pair and striking out four in five and one-third innings. The Birds had assaulted Halos starter Rudy May (how 'bout that?) and reliever Bob Priddy for 11 runs in the first 3 innings, and Marcelino reaped the benefits.

-He had a much better season in 1970, compiling a 2.08 ERA in 25 games. The southpaw even saw action in Game Two of the World Series, relieving Moe Drabowsky with two on and one out in the seventh inning and the O's clinging to a 6-5 lead. He got Bobby Tolan to foul out to Brooks Robinson and was relieved by Dick Hall, who closed out the inning and finished the game. In his only Fall Classic action, Lopez faced one batter and earned a hold!

-Marcelino finished his big league career with a mediocre season in Milwaukee and a four-game cup of coffee in 1972 with the Indians. In parts of eight seasons he was 31-40 with a 3.62 ERA and a pair of saves.

Fun facts about Rudy May:

-He had the rare distinction of changing organizations three times before his 21st birthday. The White Sox acquired him in the minor league draft in late 1963 and traded him to the Phillies the following October. Two months later, he was dealt to the Angels for Bo Belinsky.

-May debuted with the Halos on April 18, 1965 and immediately attracted notice. He held the Tigers hitless until Jake Wood doubled with one out in the eighth. Wood scored the tying run on a George Smith error, ad May was lifted after nine innings of one-hit, ten-strikeout ball with the game still tied. There would be more growing pains that year; his ERA was a manageable 3.92, but he battled control problems (78 BB/76 K) and posted a 4-9 record.

-May was traded to the Orioles in the massive 10-player deal in June 1976 that also brought Tippy Martinez, Rick Dempsey, and Scott McGregor to Baltimore. In a season and a half with the O's, the lefty was 29-21 with a 3.68 ERA.

-A native of Paducah, KY, Phil signed with the Braves as a teenager in 1959.

-He comes from a big baseball family. Younger brother Gene was an outfielder with the Cardinals and Expos in the early 1980s, and cousin Eddie Haas briefly played outfield for the Cubs and Braves between 1957 and 1960, and managed Atlanta in 1985. Three other brothers played in the minors, as have three nephews!

-Roof spent six seasons in the Milwaukee farm system, appearing in one major league game each in 1961 and 1964.

-In 1965, Phil embarked on a long career as a light-hitting part-time catcher, appearing in 52 games for the Angels and Indians and batting a scant .162 with three RBI. He stuck around for years thanks to a reputation for handling young pitchers well.

-Roof moved on to the Brewers for a season and a half before landing in Minnesota, where he remained for parts of six seasons. In limited play in 1975 (142 plate appearances in 63 games), the veteran had by far his best rates: .302 AVG/.353 OBP/.484 SLG. He also matched his personal-best total of seven home runs.

-After short cameos with the White Sox and Blue Jays, Phil retired in 1977. He left behind a .215 average with 43 home runs and 210 RBI in a career that spanned 15 big league seasons.

-He managed for 16 seasons in the Twins organization, including 11 years with their AAA affiliates in Portland, Salt Lake City, and Rochester. Overall his record was 1165-1116 at the time of his retirement in 2005.

-Roof also served as a bullpen coach in the majors for the Padres, Mariners, and Cubs. 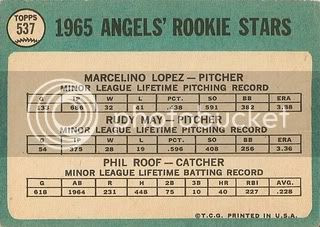