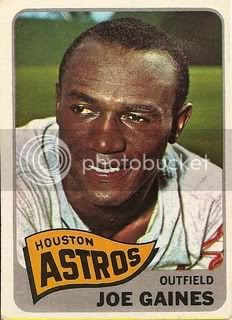 I'd suspect that Joe Gaines is wearing an Orioles jersey in this photo. He was traded in June 1964, and I'm guessing Topps wasn't in a hurry to snap his photo in Spring 1965 and squeeze it into the high-number series.

-1962 was his first full season in the majors, but Joe received only 60 plate appearances in 64 games. He started only two games, and hit .231 overall.

-On April 14, 1964, his pinch homer off of Chicago's Gary Peters tied the game 3-3 in the seventh inning. The O's tacked on a pair of runs in the eighth to win.

-A mid-1964 trade to Houston allowed Joe to start regularly. He reached personal bests with 8 home runs and 36 RBI while batting .246.

-After slumping to .227 in 1965, he played only 11 games in Houston the following year before being sent to the minors.

-Gaines spent the last three years of his career with various AAA teams. In parts of seven seasons in the majors, he batted .241 with 21 home runs and 95 RBI.

-Later in life, Joe worked as a clothing salesman. 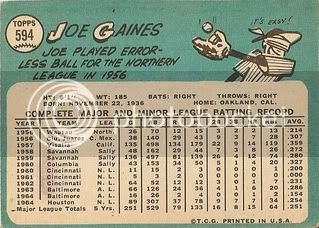