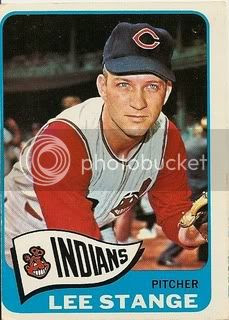 There's an odd sort of perspective going on in this photo. Does Lee Stange have his glove resting halfway on his left hand, or is that an optical illusion?

-A Chicagoan by birth, Lee attended Drake University in Des Moines before signing with the Senators in 1957.

-Pitching for the Class B Wilson Tobs in 1960, Stange was a Carolina League All-Star. He led the league in several statistical categories, going 20-13 with 20 complete games.

-Had a few cups of coffee with the Twins in 1961, earning his first career win with four strikeouts in two scoreless relief innings against the Indians on September 15.

-On September 2, 1964, Stange struck out 10 Senators in a 9-0 win. He tied a major league record by whiffing four batters in the seventh inning. Don Lock, the subject of yesterday's post, led off with a strikeout but reached base on a passed ball.

-Posted a career-low 2.77 ERA for the American League Champion Red Sox in 1967 while throwing a career-high 181.2 innings. Had only an 8-10 record to show for it. Appeared in relief in Game Three of the World Series, allowing three hits and an unearned run in two innings.

-Stange jumped right into coaching. He served on major league staffs in Boston (1972-1974, 1981-1984), Minnesota (1975), and Oakland (1977-1979). He also had three stints as a minor league pitching instructor for the Red Sox totaling more than a decade and managed the Athletics' AAA Tuscon club in 1976. He is now the pitching coach for the NCAA Division II Florida Tech Panthers. 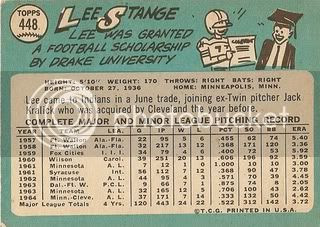