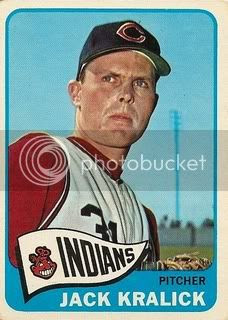 The best word I can think of to describe the look on Jack Kralick's face is "ominous". Something wicked this way comes.

-Born in Youngstown, OH, Jack attended Michigan State University before signing with the White Sox in 1955.

-Chicago released the minor leaguer in June 1958, but he signed with the Senators at the end of the season.

-Despite never having pitched above A-ball, Kralick made Washington's opening day roster in 1959 at age 23. He was battered in five relief appearances, and spent much of the remainder of the year back in the minors.

-Kralick and reliever Al Schroll each hit solo home runs in Minnesota's 9-7 victory over the Angels on August 20, 1961. It was only the sixth time that two pitchers have homered for the same team in one game; no one has done it since.

-On August 26, 1962, he retired the first 25 Kansas City batters before walking pinch hitter George Alusik. Jack completed his no-hitter by coaxing foulouts to the right side by each of the last two batters.

-After winning a total of 25 games in two seasons as a full-time starter for the Twins, he was dealt to Cleveland in May 1963 for Jim Perry. The early returns were positive for the Tribe, as their new pitcher was 13-9 with a 2.92 ERA and 10 complete games in 27 starts that season.

-1965 was the beginning of the end for Kralick as a pitcher. He went 5-11 with a 4.92 ERA and lost his regular spot in the rotation. In August, an argument over TV channels with roommate Gary Bell escalated into a vicious fight, and Jack was left with a missing tooth and facial lacerations.

-He retired in 1967 following a car accident that resulted in a cracked rib and double vision. In parts of nine seasons he was 67-65 with a 3.56 ERA. Jack later worked for a school supply company in Watertown, SD. 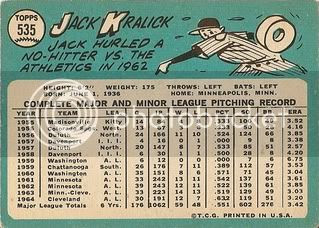