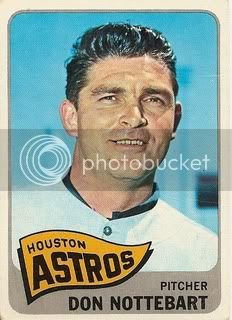 Should you be wondering which team's uniform is being obscured by the bottom frame of this card, that would be the...Colt .45s. I actually had to double-check - forgot about the Great Houston Rebranding Caper!
Fun facts about Don Nottebart:
-Born in Newton, MA, Don signed with the Braves in 1954 after completing high school.
-Won exactly 18 games in four out of five minor league seasons, but did not debut with Milwaukee until 1960. The 24-year-old earned his first win with 3.2 scoreless innings of relief on July 3.
-Led the Braves with 39 relief appearances in 1962, putting up a tidy 3.23 ERA.
-Moved to the rotation following a trade to Houston and went 11-8 with a 3.17 ERA in 1963, setting a career high in wins and notching nine complete games.
-On May 17, 1963, Don threw the first no-hitter in team history in a 4-1 win over the Phillies, striking out eight batters. His shortstop J.C. Hartman committed an error that led to the lone Philly run. The pitcher claimed later that he had abandoned his curveball and threw only a sinking fastball and slider during the gem.
-He struggled mightily in his second and third seasons with the Colts/Astros, with a cumulative record of 10-26 and a 4.29 ERA.
-On September 13, 1965, he surrendered Willie Mays' 500th career home run just five days after allowing Mays' 497th.
-Re-established himself with two good years in the Cincinnati bullpen, including a 3.07 ERA and 11 saves in 1966 and a career-best 1.93 ERA the next season.
-Curiously, Nottebart spent two of the final three seasons of his career in the minor leagues, sandwiching a subpar 24 innings split between the Yankees and Cubs in 1969. Overall, his major league record was 36-51 with a 3.65 ERA and 21 saves in parts of nine seasons.
-Don spent the post-baseball phase of his life operating a service station and a carpet and flooring business. He spent his last few years in poor health and died in December 2007 at age 71. 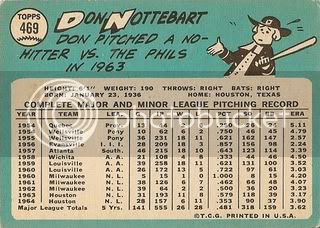