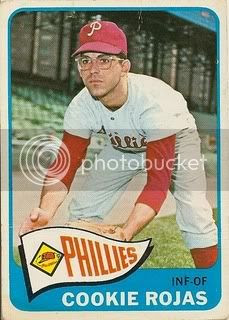 Of all of the bespectacled players in this set, I think Cookie Rojas' frames are the most stylish. In unrelated news, fellow blogger dayf, a.k.a. Cardboard Junkie, has dedicated three and a half blog posts to the ridiculous trade offers he's received for his 1971 Topps Cookie Rojas card on the Million Card Giveaway site. See for yourself.

-Cookie hails from Havana, Cuba and signed with Cincinnati in 1956.

-He was regarded as a skilled defender at the keystone, leading his league in fielding percentage three times and topping the loop once each in range factor and putouts. But he was also versatile, playing all nine positions at least once during his career. If you're curious, his lone pitching performance was a scoreless ninth inning in a 12-3 Phillies loss to the Giants on June 30, 1967. He allowed a hit to Tom Haller, but retired Willie Mays on a flyout to end the inning.

-Was traded to the Cardinals in October 1969, but played until 23 games in St. Louis in 1970 before being dealt to Kansas City.

-After hitting .234 in the previous three seasons, Cookie revived his career with the Royals with four straight All-Star appearances beginning in 1971 (.300 AVG, career-high .763 OPS). In 1973 he achieved personal bests with 29 doubles and 69 RBI.

-In the 1972 All-Star Game, his eighth-inning two-run homer off of Bill Stoneman was the first home run by a foreign-born player for the American League team in Midsummer Classic annals.

-Rojas spent his last few seasons in K.C. filling in at third base, first base, and designated hitter after Frank White displaced him at second. His final year in the majors was 1977, and he retired with a .263 average in parts of 16 seasons. He totaled 54 home runs and 593 RBI.

-Cookie has stayed in baseball ever since, working as a coach for the Cubs, Marlins, Mets and Blue Jays and as a scout, front office employee and manager for the Angels (he went 75-79 in a partial season in 1988). He has been a Spanish-language broadcaster for the Marlins since 2003.

-His sons Mike and Victor both played minor-league baseball. Mike also managed in the minors for a dozen years and is now the Tigers' Minor League Field Coordinator. Victor has worked as a broadcaster for the Diamondbacks, Rangers and Angels and is now an anchor for the MLB Network. 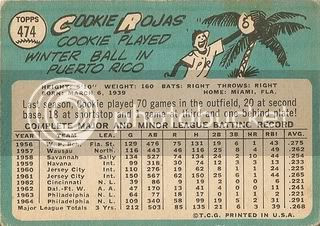