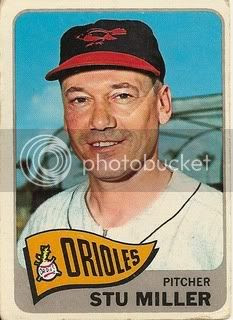 Assuming this photo was taken in the spring of 1964, Stu Miller would have been 36 years old. He doesn't look a day over 50.

-Stu was born in Northampton, MA and signed with the Cardinals in 1949.

-St. Louis promoted him to the majors in August 1952. The 24-year-old made an immediate splash by completing five of his first six starts, including a six-hitter against the Cubs in his debut and a four-hitter against the same team a few weeks later. Overall he was 6-3 with a 2.05 ERA in a dozen games.

-Poor results in his second and third seasons relegated him back to the minors, but Miller regained his footing after the Giants acquired him in 1957. A year later, he led all National League pitchers with a 2.47 ERA in 41 games (20 starts).

-Teammates and opponents alike seemed baffled by his success. Stu was only 5'11" and weighed between 150 and 165 pounds during his career. Milt Pappas said that he had three speeds for his pitches: "Slow, slower, and slowest". Frank Robinson claimed that he didn't know how Miller's soft tosses reached home plate. Orioles teammates sarcastically dubbed him "Bullet".

-In 1961, Miller made his only All-Star team by crafting a 14-5 record and a 2.66 ERA in relief and pacing the N.L. with 17 saves. He picked up the win on his home field in the Midsummer Classic, but his appearance was notable because he committed a balk due to the notorious high winds at Candlestick Park! Contrary to popular belief, he was not "blown off the mound". Instead, a strong gust caused him to jerk his shoulders while in the set position.

-Following the 1962 season, he joined the Orioles in a six-player trade and delivered immediate results. In his first season in Baltimore, he led the American League with career highs of 71 games pitched and 27 saves. His 2.24 ERA was the best on his team as well.

-In five years with the O's at the end of his career, he had an incredible 2.37 ERA, a 1.12 WHIP, and an even 100 saves. Of course there was also the one that got away: on April 30, 1967, he relieved Steve Barber in the ninth inning of a 1-1 tie game against Detroit. Barber had allowed no hits but walked ten, and Miller inherited runners on the corners with two out. He induced a grounder to short by Don Wert, but Mark Belanger could not handle the throw to second base cleanly and the winning run scored. Al Kaline followed with a groundout, but the Birds came up empty in their final at-bat and Barber and Miller combined for a losing no-hitter. He also made dubious history two weeks later by surrendering Mickey Mantle's 500th career home run - the only time the Mick took him deep in 18 career meetings.

-Stu currently lives in Cameron Park, CA. He owned a liquor store for several years after his playing days, and he and his wife Jane have six children (four sons, two daughters). 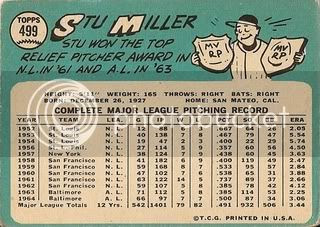