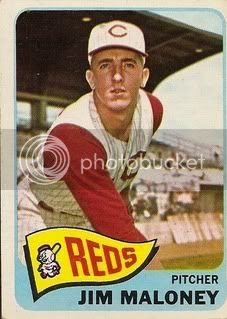 If there is any player in this set who would have benefited from an action photo, it would have to be Jim Maloney. It seems a shame for such a hard thrower to have a posed picture.

-After going 14-5 with a 2.80 ERA at AA Nashville, he debuted with Cincinnati in July of 1960. He won only two of his eight big league decisions that year, but impressed with a four-hit shutout of the Phillies on September 24. In that game, he struck out a season-high 11 hitters.

-Jim was an All-Star for the only time in his career in 1965, when he went 20-9, set a personal best with a 2.54 ERA, and struck out 244. He did not factor in the Cy Young voting in either of his 20-win seasons, as an out-of-his mind Sandy Koufax was a unanimous winner in both years.

-He lost a 1-0 heartbreaker on June 14, 1965, no-hitting the Mets for ten innings before Johnny Lewis led off the eleventh with a home run. He struck out an eye-popping 18 hitters and walked just one. He got a bit of redemption on August 19, when he no-hit the Cubs at Wrigley Field for ten innings and Chico Cardenas helped him out with a solo home run in the top of the tenth. That performance was a little less artful, as he nearly matched his 12 strikeouts with 10 walks, but all's well that ends well.

-A decade of wear and tear (including a severed Achilles tendon) took its toll on Jim. He appeared in just 20 games total between the 1970 and 1971 seasons, allowing 38 runs in 47 innings for the Reds and Angels and walking twice as many as he struck out. California and St. Louis both released him within three months in early 1972, and he retired in June after he couldn't regain his strikeout form with the Giants' AAA Phoenix club. 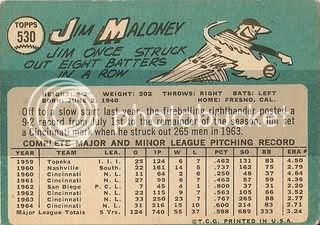