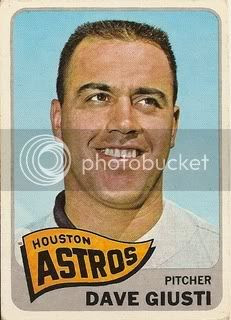 The caption for this photo? "Daww, you guys!"

-Seneca Falls, NY native Giusti pitched for Syracuse University before signing with the Colt .45s in 1961.

-He made Houston's major league roster in 1962 at age 22, and earned his first career win on May 30 with nine innings of three-hit, no-run relief. He entered the game in the sixth with the Cubs leading 6-5 and kept Chicago off of the scoreboard while the Colts tied the game and finally won the thing in the 14th!

-The aforementioned 1966 season included a three-hit shutout of Cincinnati, a one-hitter against the Giants, and an 11-0 win in which he six-hit the Reds and helped his cause with a pair of bases-loaded doubles for six RBI!

-After one season in St. Louis, Dave joined the Pirates in 1970 and was converted to relief by manager Danny Murtaugh. He took to it well, going 9-3 with a 3.06 ERA and team-high 26 saves, the first of four straight 20-save seasons for him.

-Continued his mastery in the 1971 postseason, shutting out the opposition in four NLCS appearances and three World Series games. His totals: 10.2 IP, 4 H, 4 BB, 7 K, 0.75 WHIP, and of course a World Series Champion's ring.

-Dave worked as a corporate sales manager for American Express, and has since retired to Upper St. Clair, PA. 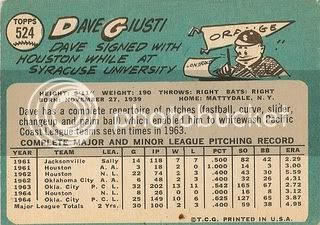