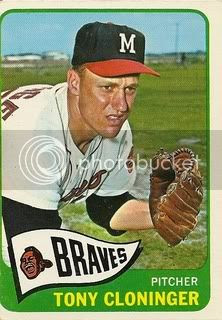 Well, I hope you've enjoyed the holiday weekend. Here's a badly miscut card, which doesn't bother me much. I'd rather have an off-center card than one that's bent in half or scribbled all over.

-He endured a nine-game losing streak with a 9.59 ERA at Class B Cedar Rapids in his second pro season, and was in the majors to stay at age 20 in 1961.

-He was a dangerous hitter throughout his career, batting .192 with 11 home runs overall. On July 3, 1966, he became the first National League player to ever hit two grand slams in a game and set a record for pitchers with nine RBI as the Braves crushed the Giants 17-3. Oh yeah, he also earned a complete-game victory.

-In mid-1968 Tony was traded to the Reds. He received his only postseason exposure with Cincinnati in 1970, starting the Game Three NLCS clincher but getting no decision (2 ER, 5 IP). The Orioles beat him  in Game Three of the World Series (incidentally, pitcher Dave McNally's grand slam off of Wayne Granger broke it open), and he allowed a run in two innings of relief in Game Five as the O's clinched.

-Cloninger split 1972, his final active season, between the Cardinals and Atlanta's AAA Richmond squad. In parts of 12 big league seasons he was 113-97 with a 4.07 ERA. 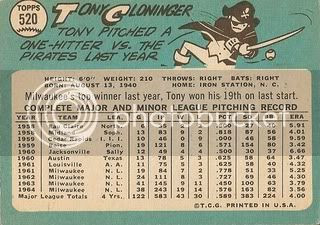