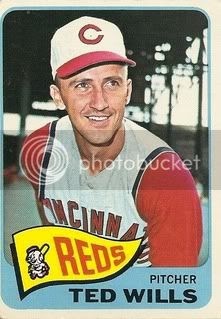 Looking at Ted Wills' jersey made me wonder if the Reds have always worn "Cincinnati" across their chests on the road. According to the "Dressed to the Nines" uniform database, they have done so since 1961, so they've got a 50-year streak going. Prior to that, they switched things up a lot. Check out these unusual threads from 1936!

-Ted was born in Fresno, CA and attended the California State University campus in Fresno before signing with the Red Sox in 1955.

-Ted spent the second half of the 1960 season with the Red Sox and struggled even more, pitching to a 7.42 ERA in 30.1 innings. He did earn his first save on July 3 by slamming the door on the A's with 2.1 perfect innings. It's not often that a pitcher is credited with a save in a 13-2 game; it was 4-2 when Ted was summoned in the seventh, and Boston scored eight runs in the bottom of that inning and tacked on another in the eighth!

-He was shunted to the minor leagues in 1963, where he won 27 games during the next two seasons with Cincinnati's AAA San Diego club.

-The White Sox aquired Ted in 1965 and kept him on the major league roster for the first two months of the season. Pitching in relief, he had a tidy 2.84 ERA, two wins, and a save, but a closer look shows that he just got lucky. He was still giving up plenty of hits (17 in 19 innings) and walks (14), and 7 of the 13 runners that he inherited (54%) scored on his watch. He spent the rest of that year in the minors and never pitched in organized ball again. 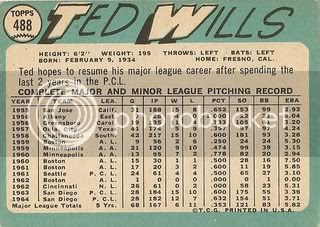