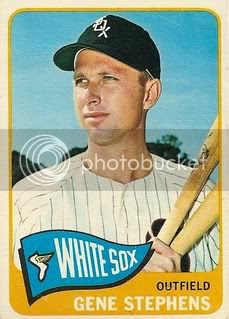 Though Gene Stephens' career overlapped with All-Star infielder Vern Stephens, they were not related. They were briefly teammates with the 1952 Red Sox, and both played at different times for the Orioles and White Sox. It probably means something; what that could be, I have no clue.

-Stephens spent much of 1953 with the Red Sox but didn't do much to distinguish himself. His shining moment came on June 18, when he became the first major leaguer in the modern (post-1900) era to collect three base hits in a single inning. He singled, doubled in two runs, and singled in another run in Boston's 17-run seventh inning as they romped over the Tigers 23-3. Another BoSox player matched the feat decades later: Johnny Damon.

-Boston traded center fielder Jimmy Piersall after the 1958 season, seemingly paving the way for Stephens to play more regularly. However, a wrist injury suffered while making a diving catch cost him seven weeks in May and June of 1959. He did recover, batting .294 in 78 games (51 starts) after his return.

-He was a Baltimore Oriole for almost precisely a calendar year. Boston traded him to the O's on June 9, 1960 and the Birds dealt him to Kansas City on June 8, 1961. He was traded for a pair of characters: first Willie Tasby (who once played center field in his socks because he refused to wear metal cleats during a thunderstorm) and later "Marvelous" Marv Throneberry.

-Three years of poor results and injuries saw Gene land with the White Sox' AAA Indianapolis club in 1963. He regained his stroke, batting .305 with 17 home runs and 72 RBI to earn a late-season look.

-He finished his big league career as a part-timer in Chicago in 1964, though he competed back in the minors for two subsequent seasons. In parts of 12 seasons, he was a .240 hitter with a .325 on-base percentage, 37 home runs, and 207 RBI.

-Three of his career homers were hit off of Detroit's Frank Lary, his most against any opposing pitcher. They included his only inside-the-park home run (a pinch-hit HR no less), his only longball to lead off a game, and a two-run pinch-hit homer in the seventh inning to give the Orioles the lead in a game they won 3-1 (box score here).

-Gene was later employed for 21 years as a district manager at the Kerr-McGee Refining Company, an Oklahoma company that was the largest offshore driller in the United States. He then retired to Grandbury, TX. 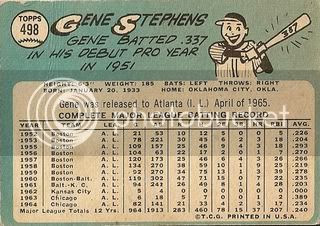