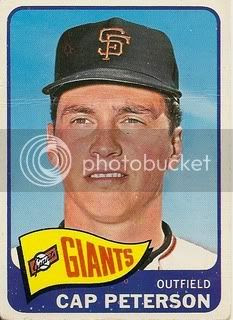 You are not going to believe this, but for the second consecutive day we're featuring someone whose nickname is comprised of his initials. Charles Andrew Peterson was commonly known as "Cap". I would go by a similar moniker, but it's hard to pronounce "Kmb".

-Cap hit .259 in a few short stints totaling 22 games in 1963. The highlight was a May 30 game against Cincinnati in which he went 3-for-5 with the first two extra-base hits of his career, a home run and a double.

-He spent the next three seasons as a backup outfielder for the Giants, batting .233 in that span while Willie Mays, the Alous, and Len Gabrielson got the lion's share of playing time.

-May 30 must have been Cap's lucky day: four years to the day that he had hit his first double and home run, he hit his only career walk-off home run. It came on May 30, 1967, in the second game of a doubleheader against the A's. With two outs in the bottom of the 11th inning, Cap took Jack Aker deep for a 4-3 Senators victory.

-Two weeks later, the outfielder went 4-for-9 with two homers and three RBI against the White Sox in a game that Washington pulled out in 22 innings(!). Both home runs came in the early stages of the game, and both were hit against Joel Horlen, who would go 19-7 with a league-best 2.06 ERA that season. In the 22nd inning, Peterson singled in the midst of the game-winning rally; Mike Epstein came up after him and was intentionally walked to load the bases, at which point Paul Casanova singled to end the 6 hour, 38 minute slog.

-Peterson slumped to .204 in 1968 and finished his big league career as a part-timer in Cleveland the following year. He spent the next three years hanging on in the minors before walking away for good in 1972. In parts of eight seasons he had a .230 average, 19 home runs, and 122 RBI.

-He died tragically young, succumbing to kidney disease in 1980 when he was only 37. 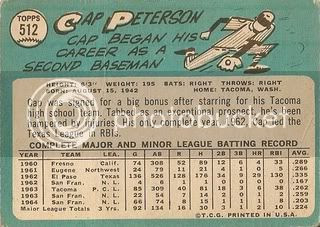