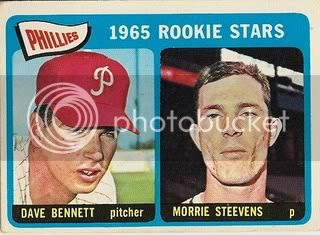 Check out the wild difference between Dave Bennett's youthful, pimply face and the sallow, scarred cheeks of Morrie Steevens. It's like a before and after.

-A native of Berkeley, CA, Dave signed with the Phillies as a teenager in 1963.

-His brother Dennis pitched for the Phillies, Red Sox, Mets, and Angels between 1962 and 1968. We visited with him on this blog last year.

-Dave made his first and only major league appearance on June 12, 1964, allowing one run in an inning of mop-up relief. Older sibling Dennis started for Philly that day and was knocked out early. The younger Bennett was one of two 18-year-olds to take the mound for the Phils that day. The other was Rick Wise, who had a much longer career.

-He pitched in the minors for another decade after his lone big league game, retiring with a 92-68 record and a 3.41 ERA in a dozen minor league seasons with the Philadelphia and Pittsburgh organizations.

-Dave's son Erik was a relief pitcher for the Angels and Twins in the mid-1990s, and has been a minor league pitching coach for the past decade.

-Born in Salem, IL, Morrie signed with the Cubs out of high school in 1958.

-He won 55 games in his first five professional seasons, and debuted with the Cubs in early 1962 at age 21.

-Despite allowing 11 walks and striking out only 5 in 15 innings, Steevens posted a low 2.40 ERA in relief in his rookie season. On September 27, 1962, he struck out a pair of Phillies in three perfect innings. One of his strikeouts was opposing pitcher Dennis Bennett, who shut out the Cubs that day!

-He was acquired by the Phillies prior to the 1964 season and made four appearances in September, allowing three runs (one earned) in two and two-thirds innings. His first outing of the season (September 19) did not go smoothly. Summoned in the bottom of the 16th inning in a tie game against the Dodgers, he pitched to Ron Fairly with runners on second and third and two outs. Willie Davis stole home and the Phils lost without Morrie having officially faced a batter.

-Steevens pitched in six big league games in 1965, his final season in the majors. He allowed five runs in two and two-thirds innings for a 16.88 ERA. 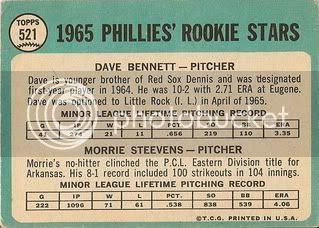