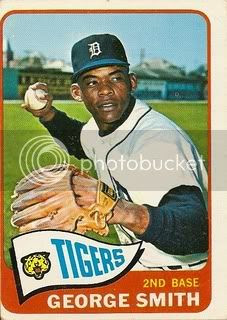 Whoa...check out the ears on George Smith! Given the intrinsic cruelty of ballplayers, I'm surprised he didn't acquire a nickname like "Dumbo".

-George was born in St. Petersburg, FL, and attended Michigan State University. He signed with the Tigers in 1958.

-Prior to catching on with Detroit, he played in the Negro Leagues with the Indianapolis Clowns.

-Smith debuted with the Tigers in August 1963 and served as the team's regular second baseman for the final two months of the season. He batted just .216 with a .298 on-base percentage and 17 RBI.

-George did play an instrumental role in a 10-1 romp over the Red Sox on August 6, in his second career game. He went 3-for-4 with two doubles, a triple, two runs scored, and three RBI.

-He saw action in only 37 major league games over the next two seasons, spending most of his time at AAA Syracuse.

-In October 1965, he was one of three players traded to Boston for pitcher Bill Monbouquette. The Red Sox subsequently dealt away incumbent second baseman Felix Mantilla, which paved the way for George to start the lion's share of games at that position. Again he didn't do much with the bat (.213/.283/.340), but he at least showed a bit more power with 8 homers and 19 doubles. Several defensive metrics also indicate that he was one of the American League's top glovemen at second base as well.

-On July 10, 1966, he hit a walkoff grand slam off Chicago's Juan Pizarro with one out in the bottom of the tenth inning. Boston won 10-6 to sweep a doubleheader.

-Smith tore cartilage in his knee in spring training in 1967 and never played another game in the majors,though he did spend some time in the minors in 1967 and 1968. 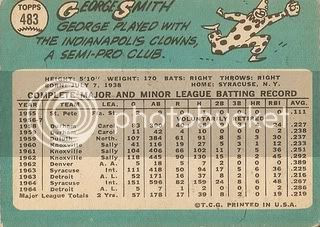