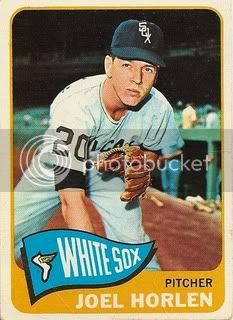 Is it just me, or does Joel Horlen look like Orel Hershiser in this photo? A little less nerdy, maybe.

-A native of San Antonio, TX, Joel was a second-team All-American at Oklahoma State University, where he led the Cowboys to the College World Series in 1959 before signing with the White Sox.

-He earned the win in his big league debut (September 4, 1961) with four innings of shutout relief against the Twins. In the game, he wore a jersey with no number on the back, as it was the only spare road top available!

-Horlen took a leap forward in 1964, leading the American League with an 0.93 WHIP and 6.1 hits allowed per 9 innings. His 1.88 ERA trailed only Dean Chance of the Angels, yet he had only a 13-9 record to show for his efforts as the Pale Hose bats produced only 2.84 runs per start for him.

-Low earned run averages and disappointing win-loss records were the theme from 1964-1968. In that five-year span, Joel had a miniscule mark of 2.32 and a WHIP of 1.06 but his record was an underwhelming 67-56.

-Also of note that year was Joel's September 10, 1967 no-hitter against the Tigers. Only a third-inning walk of Bill Freehan and a fifth-inning error by Ken Boyer kept him from perfection.

-Though he lost some effectiveness as the 1970s dawned, it is worth noting that the White Sox did not release him until the spring of 1972, two weeks after the players had voted unanimously for a labor strike. Horlen had been the team's representative in the players' union.

-He's spent years coaching and scouting for the Giants organization, and is an avid golfer. He also briefly returned to the mound at age 52 with the St. Lucie Legends of the Senior Professional Baseball Association in 1989. There is an extensive interview with Horlen at White Sox Interactive. 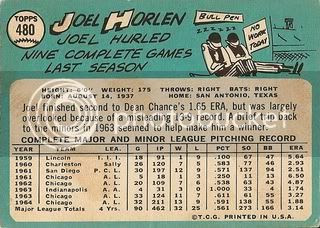