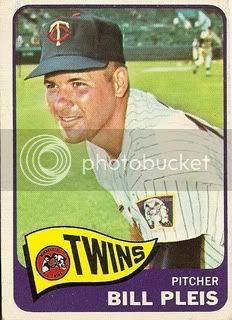 Say, did you know that Bill Pleis was born on August 5? He has excellent taste in birthdays. (NOTE: A certain card blogger shares this birthdate.)

-Late that season, he was dealt to the Senators for two unnamed players and $250.

-He earned a win in his big league debut on April 16, 1961. The Twins (in their first season in Minnesota after leaving D.C.) coughed up a 4-2 lead in the bottom of the ninth to the host Orioles, but Pleis relieved Ray Moore and stranded inherited runners on the corners. He then retired the O's 1-2-3 in the 10th, and a solo home run by Zolio Versalles in the 11th gave him the victory. Chuck Stobbs picked up the save.

-Six days later, he picked up the team's first home win in Minneapolis under similar circumstances, entering in the ninth inning of a 4-4 contest against the Senators and tossing two scoreless frames. Versalles won it again, this time with a sac fly to score Earl Battey in the home half of the 10th.

-Though he totaled just 281 major league innings, Pleis did participate in 1964's All-Star Game. Back then, active pitchers were often chosen to throw batting practice before the game, and he was selected to do the honors.

-The lefty last pitched in the majors in 1966, allowing a pair of earned runs in 9.1 innings. He spent the rest of the year at AAA Denver, and continued playing in the minors through 1968.

-He spent a few years working as a scout for the Dodgers. 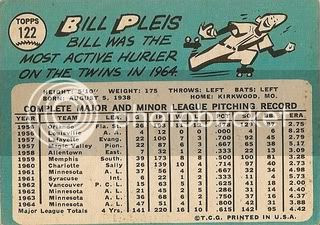