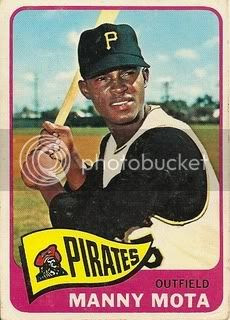 -A native of Santo Domingo, Dominican Republic, Manny was 19 when he signed with the Giants in 1957.

-He never batted lower than .289 in a minor league season, and made it to the majors in 1962 with San Francisco. He appeared in 47 games, batting .176 before returning to the minors at the end of July.

-Mota was traded twice in the following offseason, going from San Francisco to Houston to Pittsburgh. He would stay with the Pirates for seven seasons, though.

-Manny developed a reputation as a player who could lash line-drive singles with regularity; his batting average topped .300 in seven seasons (minimum 100 AB).

-After a two-month stint in Montreal, he was dealt to the Dodgers; he would spend the rest of his career there, encompassing 13 seasons. In L.A. he became a pinch-hit specialist, breaking Smoky Burgess' record for career pinch hits when notching #146 in 1979. Fellow longtime Dodger Lenny Harris passed Mota in 2001.

-Manny joined the Dodgers' coaching staff in 1980, and remained the team's batting instructor for ten seasons. The club even activated him briefly during the 1980 and 1982 seasons!

-Four sons played professional baseball, with two making it to the majors; Andy played in 27 games for the Astros in 1991, and Jose played briefly for the Padres (1991) and Royals (1995). 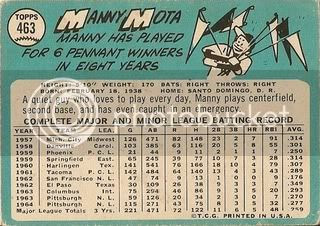