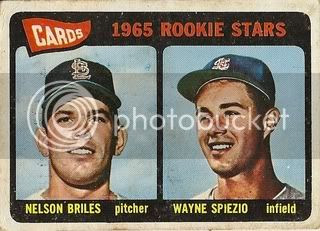 Hey, wouldja lookit that? In Nellie Briles, we have yet another ballplayer who shares my birthday. As happenstance goes, Night Owl just wrote about Nelson in his 1975 Topps blog. Small world, eh?

-Nelson was born in Dorris, CA and attended Santa Clara University before signing with the Cardinals in 1963.

-He went from college to AA to the majors in the span of two years, going north with the Redbirds in 1965 at age 21. He put up a 3.50 ERA while working out of the Cards bullpen in his rookie year.

-When Bob Gibson broke his leg in 1967, Briles took his place in the St. Louis rotation and picked up the slack. He won his final nine decisions of the season, pitching to a 1.49 ERA in that span. Overall he was 14-5 with 6 saves and a scant 2.43 ERA. His .737 winning percentage topped the National League.

-Beginning in 1967, he established himself as a strong postseason pitcher, earning a complete-game win in the third game of the World Series by holding Boston to two runs on seven hits. In six career postseason games encompassing 37.1 innings, he compiled a 2.65 ERA. It's also worth mentioning that he sang the National Anthem before a game in the 1973 Fall Classic!

-1968 represented Nellie's first full season as a starting pitcher, and he set career highs with 19 wins, 13 complete games, and 4 shutouts.

-He spent three seasons with the Pirates (1971-1973) following a trade from the Cardinals, and amassed a 36-28 record and a 2.98 ERA in Pittsburgh. His most notable game as a Pirate came in Game Five of the 1971 World Series, as he shut out the Orioles on two hits to give the Bucs a 3-2 series lead.

-Briles spent the last five years of his career in the American League with the Royals, Rangers, and Orioles, finishing up in Baltimore in 1978. In parts of 14 seasons, he was 129-112 with a 3.44 ERA.

-Nellie worked in the Pirates' organization as a broadcaster, a sales director, and the director of the annual fantasy camp. He also did some broadcasting work for the Mariners.

-Sadly, he suffered a fatal heart attack during the Pirates' annual alumni golf tournament in Orlando in February 2005. He was 61 years old.

-You probably know him better as Ed Spiezio (Wayne was his middle name). He was born in Joliet, IL and attended the University of Illinois as well as Lewis University (Romeoville, IL) before inking a deal with the Cardinals in 1963.

-He was 22 years old when he debuted with St. Louis in July 1964. He collected 4 hits in 12 big-league at-bats that year, including a single off of Lew Burdette for his first career hit on August 4.

-He was traded to the fledgling Padres prior to the 1969 season, and was the club's primary third baseman for their first three years of existence. In his initial season in San Diego, he batted just .234 but set career highs with 13 home runs and 43 RBI. He also finished first in the National League in range factor at his position.

-On April 8, 1969, he had the first hit, home run, and run scored in Padres history. All three came on a fifth-inning solo home run against the Astros' Don Wilson.

-Another notable home run came on August 6, 1969. He led off the bottom of the ninth with a tie-breaking shot off of Steve Carlton, allowing San Diego to walk off a winner.

-His career ended abruptly in 1972 when he was 30 years old. He split that season between the Padres and White Sox, hitting .229 with only two home runs.

-His son Scott was an infielder for the Athletics, Angels, Mariners, and Cardinals, 1996-2007. 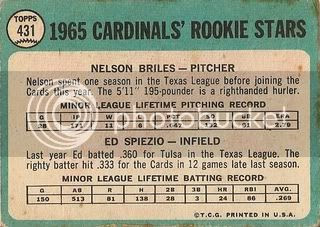