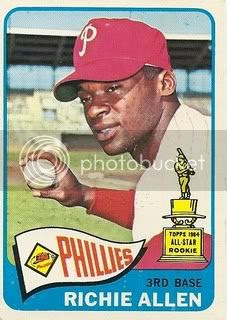 Chances are good that you know this man as "Dick" Allen, the mercurial, bespectacled, facial-hair-clad slugger of the 1970s. There's almost a three-dimensional aspect with the placement of the rookie trophy in front of Allen's body.

-His older brother Hank was an outfielder with the Senators, Brewers, and White Sox (1966-1973). Younger brother Ron had a seven-game cup of coffee with the Cardinals in 1972.

-He was a seven-time All-Star, including a 1966 season in which he set career highs with 40 home runs and a league-leading slugging percentage of .632. He also topped the senior circuit with a personal best 1.027 OPS.

-During his initial six-plus year tenure in Philadelphia, his outspoken nature made him a target of fan abuse. He was so frequently pelted with projectiles while on defense, he took to wearing a batting helmet at first base.

-Allen played for four different teams from 1969-1972: Phillies, Cardinals, Dodgers, White Sox. In his first season in Chicago, he captured the American League MVP by virtue of league-leading efforts in home runs (37), RBI (113), walks (99), on-base percentage (.420), and slugging (.603). His .308 average put him in a third-place tie with teammate Carlos May, 10 points behind Rod Carew. If he had gotten just one more hit per month, he would've taken the Triple Crown.

-A productive three-season stint with the Pale Hose was marred by a broken leg suffered in June 1973 and a walk-out late in the 1974 season.

-During his career, he moonlighted as the lead singer of the Ebonistics, an R&B group that enjoyed minor success. 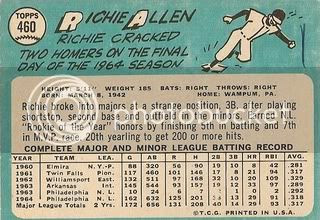