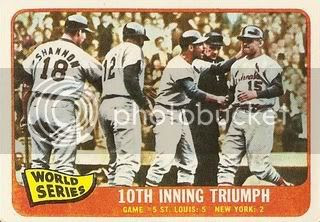 Hey look, it's Mike Shannon again! Long time, no see. From left to right, we have Shannon, Bill White, Dick Groat, home plate umpire Vinnie Smith, and Tim McCarver in the moment's following Timmy's go-ahead three-run homer in the top of the tenth inning. It's so energizing to talk about an action photo after dozens upon dozens of headshots and poses.

This was a Monday afternoon game at Yankee Stadium, taking place October 12, 1964. The two teams entered Game Five tied at two wins apiece and they were greeted by 65,633 ardent baseball fans. Starting pitchers Bob Gibson and Mel Stottlemyre traded zeroes for the first four innings. The Cardinals left the bases loaded in the first, as Stottlemyre struck out Tim McCarver to escape the jam. Gibson returned the favor an inning later, fanning Clete Boyer and Stottlemyre with the sacks packed.

St. Louis manufactured a pair of runs in the fifth to take the advantage. Gibson singled, Curt Flood reached on an error by Yankee second baseman Bobby Richardson, and Lou Brock singled his pitcher home. Bill White scored Flood on a fielder's choice. Through seven innings, the score remained 2-0 in favor of the visitors. At that point, Stottlemyre exited having allowed two runs (one earned) on six hits and two walks. He struck out six batters. Gibson showed no signs of slowing down, having pitched around four hits, two walks (one intentional) and a hit batter. He'd struck out 11 New York batters. Hal Reniff and Pete Mikkelsen kept the Redbirds off the board in the eighth and ninth frames, setting up a last gasp for the home team.

The Bronx Bombers got a reprieve in the bottom of the ninth when St. Louis shortstop Dick Groat booted a Mickey Mantle grounder to lead off the inning. Gibson rallied to strike out Elston Howard, and a Joe Pepitone comebacker left the Yanks with one last hope. Tom Tresh, a powerful outfielder and two-time All-Star, touched off a raucous celebration in the stands with a game-tying home run to right-center field. Gibson rallied to retire Pedro Gonzalez on a popout to send the game to extra innings.

Mikkelsen, who had been New York's leading fireman as a rookie in 1964 (7-4, 3.56 ERA, 12 saves), took the mound for his third inning of relief. The Cards put together a tenth-inning threat via a Bill White leadoff walk, a Ken Boyer bunt that the pitcher could not field, and a steal of third by White. Groat bounced into a force play that retired Boyer at second, and catcher Tim McCarver struck the crucial blow. His three-run home run to deep right field gave the Cardinals a 5-2 lead. They won by that same score as Gibson set down the Yankees in the bottom of the tenth, allowing only a two-out single to Richardson. The fearsome St. Louis hurler earned the win in a ten-inning complete game, totaling six hits allowed and two walks while fanning 13 batters. As a result of Groat's error, both Yankee runs were unearned.

Stay tuned tomorrow to find out how the Series ended! 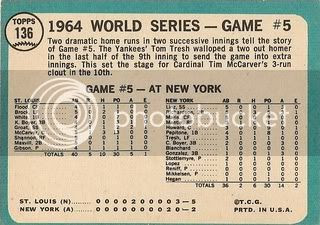