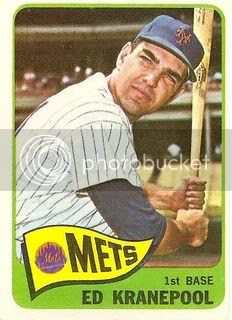 I'm going to start this post with a reminder that you can track my progress in completing this set by peering at the left sidebar. Now that I'm so close to the finish line, I've decided to take matters into my own hands. If I see a card that I still need and the price is right, I'll plunk down some cash for it. With a few such purchases over the weekend and another small trade, I now have 570 of the 598 cards. This puts me over the 95% mark...I can barely believe it! Thanks to everyone who's helped out, even if you just stopped by to read my words and offer a few remarks of encouragement.

-He bolted through three levels of the farm system and debuted in New York on September 22, 1962; he was the youngest player in the majors at the time.

-Despite a couple of midseason demotions to AAA Buffalo, Kranepool was the Mets' most frequent starter at first base in 1964. He batted .257 with a .310 on-base percentage and .393 slugging. Among starters, only Ron Hunt and Joe Christopher topped his 100 OPS+ for the lowly club.

-In 1966, his team-leading 16 home runs represented a career high. Ken Boyer (61 RBI) was the only Met to surpass the first baseman's 57 runs driven in.

-He was not one of the stronger hitters on the 1969 "Miracle Mets" club, and Donn Clendenon got most of the starts at first base in that year's World Series. However, Ed's solo home run capped the scoring in a 5-0 victory over the Orioles in Game Three of the Fall Classic.

-Ed retired after the 1979 season having played for the Mets in each of their first 18 seasons of existence. He had a .261 career average, 118 home runs, and 614 RBI. His 1,853 games played are still a franchise record. David Wright currently stands at 1,004, and will have to remain healthy and stay in New York for six more years at least to top Kranepool.

-He has been a stockbroker and restaurateur in his post-baseball days, and was selected to the Mets Hall of Fame in 1990. 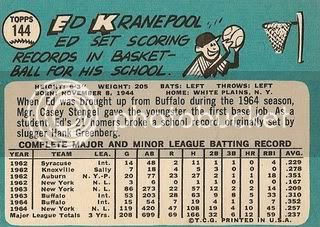