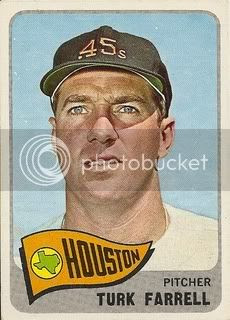 -Turk was born in Boston and signed with the Phillies in 1953 after completing high school.

-Farrell made his first All-Star team in 1958 and placed third in the National League with 11 saves.

-He had a forgettable 1961, putting up a career-worst 5.20 ERA and changing teams twice. Philly traded him to the Dodgers that May, and after an ineffective season he was unprotected and chosen by Houston in the expansion draft.

-The Colts used Turk in the rotation, giving him 29 starts among his 43 appearances in their inaugural season. He was an All-Star and one of the best pitchers in the N.L., ranking second with a 1.097 WHIP and seventh with a 3.02 ERA. He struck out 203 batters, the fourth-most in the senior circuit. Unfortunately he also placed second with 20 losses against just 10 wins.

-He had better luck in 1963, scraping together a 14-13 record while matching the previous year's 3.02 ERA and completing a personal-best 12 games.

-Farrell added two more All-Star seasons to his resume in 1964 and 1965, and had a cumulative ERA of 3.20 in his first four seasons in Houston.

-The Phillies reacquired him in May of 1967 and returned him to the bullpen. He gave them 92 innings with a 2.05 ERA and collected 9 wins and 12 saves.

-After being released by the Phillies at the end of the 1969 season, Turk caught on with the Braves but was cut without ever throwing a pitch for them in the regular season. In parts of 14 big league seasons, he was 106-111 with a 3.45 ERA and 83 saves.

-He reportedly emigrated to Great Britain and worked on an offshore oil rig in the North Sea after he was finished in baseball. He was killed in an automobile accident in Yarmouth, England in June 1977 and was 43 at the time of his death. 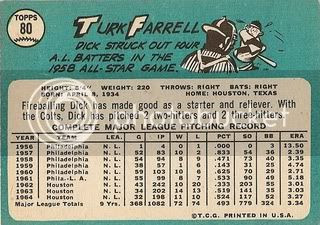