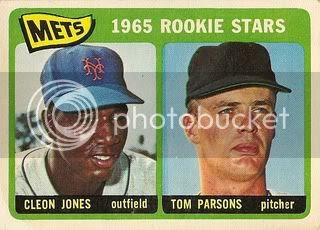 Firstly, sorry for the absence of a post yesterday. I've been in a good groove in recent months of posting every weekday, but I'm juggling a lot of things right now and had to skip. But today we jump to another handful of cards sent my way by Max. This first one features his favorite team, the Mets. Tom Parsons is presumably airbrushed out of a Pirates cap.

-Cleon was born in Plateau, AL. He played both baseball and football at Alabama A&M University and signed with the Mets in 1963.

-He debuted with New York in September of 1963, skipping AA and AAA, but had only 2 hits in fifteen at-bats. One of those hits was a single off of Sandy Koufax.

-In 1966, his first full season in the majors, Cleon batted .275 and led the team with 74 runs scored and 16 steals. He finished fourth in N.L. Rookie of the Year voting.

-After posting a .429 average (6-for-14) in the NLCS sweep over the Braves, Cleon struggled against the Orioles in the 1969 World Series, batting just .158 (3-for-19). But his fingerprints and shoeprints were all over the clinching Game 5. He led off the bottom of the sixth with the O's leading 3-0. A Dave McNally pitch skipped into the dirt at home plate and skittered away, and umpire Lou DiMuro denied Jones' claim that the ball hit him. But manager Gil Hodges retrieved what was allegedly the ball in question and showed DiMuro that there was a shoe polish stain on the surface. The outfielder was awarded first base and scored one batter later on a Donn Clendenon home run. The Mets tied it in the seventh, and Jones set the table again in the eighth with a leadoff double off of reliever Eddie Watt. He scored the go-ahead run on a Ron Swoboda double, and capped the Series the following inning by snaring a Davey Johnson fly ball.

-The Mets released him halfway through the 1975 campaign. The combination of a knee injury, disagreements with manager Yogi Berra, and an arrest for indecent exposure combined to exhaust the team's patience with him. He caught on with the White Sox the following year, but saw action in just a dozen games before receiving his release on April 30. In parts of 13 seasons he batted .281 with 93 home runs and 524 RBI.

-He was chosen for the Mets Hall of Fame in 1991, and has also been honored by the Alabama and Mobile Sports Halls of Fame.

-Tom hails from Lakeville, CT. He signed with the Pirates in 1957 out of high school.

-Parsons debuted in Pittsburgh with a start on September 5, 1963. The 23-year-old was chased in the fifth inning, allowing six runs (four earned) to the Braves on seven hits and two walks. He was saddled with the loss as Milwaukee's Bob Sadowski blanked the Bucs. The crucial blow was a three-run homer by future Hall of Famer Eddie Mathews.

-A June 1964 trade to Houston was dissolved that September, after which the Pirates sold Tom to the Mets. He spent the rest of the season in the big leagues and earned his first win on October 3. He relieved Dennis Ribant in the fourth inning with the Mets leading 8-4 and the Cardinals having loaded the bases. He snuffed out that rally and allowed a single run for the remainder of the game. New York piled on the runs and took it by a 15-5 final.

-His only 1965 win also happened to be the only shutout of his career, a six-hitter against the Cubs on July 5. As coincidence would have it, he also singled in his first at-bat that day for his lone big league hit!

-Tom never pitched in the majors again after 1965, finishing his MLB tenure with a 2-13 record and a save in parts of three seasons. His ERA was 4.72.

-Of the 19 home runs he allowed, 7 were to Hall of Famers. Eddie Mathews hit three. Much like Cooperstown enshrinee Jim Palmer, Parsons never surrendered a grand slam.

-The Astros acquired him for catcher Jerry Grote in the 1965-1966 offseason, and he spent the next three seasons at AAA Oklahoma City before concluding his career with the AA Pittsfield Red Sox in 1969. He was 95-98 with a 3.97 ERA in 12 minor league seasons. 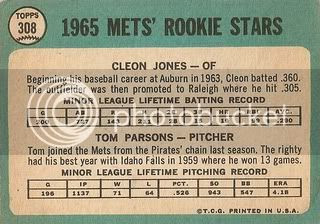