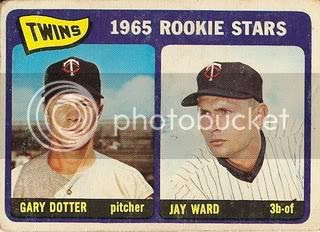 MORE Twins rookies? What is this madness?

-After his first pro season, he was claimed by the Twins in the minor league draft.

-Dotter got a September callup from the Twins and was the fourth-youngest player in the American League in 1961. He was hit hard (6 ER in 4 IP) in a mop-up relief appearance in his debut, but turned in a couple of scoreless innings in his second try.

-In another cup of coffee with Minnesota in September 1963, he added two more scoreless innings of relief to his resume.

-The Twins summoned him for the third and final time in September 1964, and he appeared in three more games, allowing a single run in four and one-third innings pitched.

-In parts of three big league seasons he did not factor in any decisions. His lifetime ERA was 5.11 in 12.1 total innings, and he walked 7 batters and struck out 10.

-Much like Dotter, Ward changed teams via the first-year minor league draft, going from the Yankee organization to the Athletics.

-After jumping from Class C to AA in 1959, he showed decent power; in three different seasons he achieved a personal best of 22 home runs. However, he did not hit for high averages and didn't walk frequently in most years.

-Minnesota promoted Jay to the majors in May 1963. He was apparently overmatched, as a two-run double on May 10 was his only hit in 15 at-bats that year.

-He performed a bit better in a September 1964 trial, batting .226 (7-for-31) with a .351 on-base percentage. But most of that production came in his first two games, when he reached base six times in eight trips to the plate against the Orioles.

-Ward spent the 1966 season in Japan playing for the Chunichi Dragons.

-Jay did have a final glimpse of the bigs in May 1970, when he appeared in six games and went 0-for-3 with a pair of walks for the Reds. 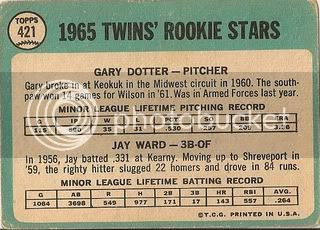