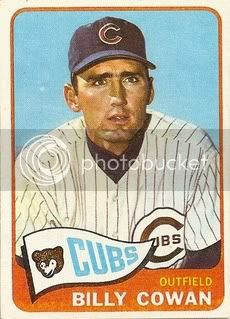 Billy Cowan looks perplexed, like maybe he's troubled by the fact that his pinstripes don't match up at the shoulder seam.

-A native of Calhoun City, MS, Billy briefly attended the University of Utah before signing with the Cubs in 1961.

-Cowan debuted with Chicago on September 9, 1963, delivering a pinch single against Curt Simmons in his first at-bat.

-The Cubs made him their starting center fielder in 1964. He flashed his power with 19 home runs and drove in 50, and led the club with a dozen steals. However, the rookie’s plate discipline was lacking; he walked 18 times and struck out 128 and batted .241 with a .268 on-base percentage.

-Billy was traded twice in 1965: a January swap sent him to the Mets for George Altman, and in August New York dealt him to the Braves. His performance was dismal: .180/.202/.301 with 3 homers and 9 RBI in 189 plate appearances. He was still swinging at everything, as evidenced by totals of 4 walks and 54 strikeouts.

-Cowan finally found his role as a part-timer with the Angels in 1969. After beginning the season with a disastrous tenure for the Yankees, he was sold to the Halos and batted .304 (17-for-56) with 4 home runs, 10 RBI, and 10 runs scored.

-His 12th-inning home run against Wilbur Wood on September 6, 1969 gave California a 2-1 walkoff win against the White Sox.

-Billy remained productive in 1970-1971, batting .276 in each season while getting most of his at-bats against left-handed pitchers (he was a righty).

-After appearing in three games, he was released by the Angels in May 1972, bringing his career to a close. In parts of eight seasons he hit .236 with 40 home runs and 125 RBI. 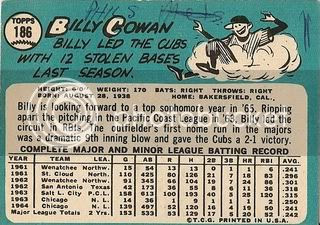